Troy falls to American at home 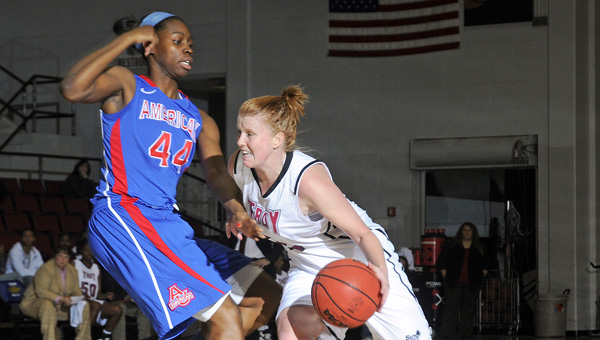 Troy's Sophie Kleeman (2) drives the ball past American's Stephanie Anya (44) during the first half of an NCAA basketball game in Troy, Ala., Sunday, Dec. 11, 2011. (Messenger Staff Photo/Thomas Graning)

The Troy women’s basketball team fell to 0-8 after a 55-45 loss to American University Sunday afternoon at Sartain Hall.

The Trojans led late but costly turnovers helped the Eagles to a 21-6 run in the final 10:30 to pull away.

Troy led by as many as six but committed 16 turnovers in the second half.

Despite the rough start, Murhpy feels his team is beginning to show improvement. The Trojans have also been plagued with injury. As many as three starters have missed significant playing time due to various ailments.

“We’re just going through a tough stretch here because of our lack of bodies at practice due to injuries,” Murphy said. “There’s nothing fun about losing but there’s no one that’s going to feel sorry for us and we’re just going to have to get back to practice and try to get better.”

Troy will travel to Montgomery Dec. 15 to take on Alabama State. Tip is set for 6 p.m.