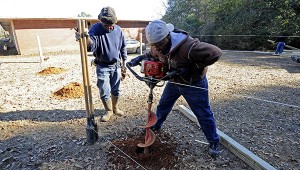 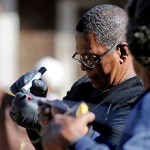 The Christian Love Center can now claim the title of having the first community garden in Troy, ending a two-year long wait for the organization.

Lawanda Bell, director of Christian Love Center, said the center had been working for the last two years to get a year-round community garden, and she could not be more excited for this opportunity.

“The children are very excited,” Bell said. “This is the first community youth garden for the Troy community. We’ve done so many things and have talked to so many people. This is something that we’ve been waiting almost two years for this to finally happen.”

James Currington with Wiregrass RC&D said the houses were built to be durable and last for several years. They allow growers to utilize them all year round.

“It’s a green house concept that allows things to grow during the cooler seasons,” Currington said. “The primary purpose of it is for things to be able to grow during the winter months. The greenhouse is closed up so it keeps it warm in the colder part of the season. If it was 32 degrees outside, in most cases, inside the house it would somewhere close to 50 or 60 degrees. It stops the vegetables from freezing.”

Currington said the company dealt a lot with school systems, and the company is actually providing the funding to allow the project to happen.

“We’re going to use it for education and training,” Currington said. “We also hope to educate others on how to build a tunnel house. We will be providing the training for the youth and others to grow the vegetables in the garden.”

The company works primarily with a professor from Tuskegee University, and Bell said the center was thankful for the attention Professor Victor Kahn would be able to provide to the students.

“The student will get their hands dirty,” Bell said. “They’ll be planting and seeing their veggies come up. We’re going to educate them on each vegetable and we are gong to talk about each of them. My main goal is to teach children where their food comes from, how to eat healthy and how to prepare the food. The professor from Tuskegee is actually going to be teaching them about the food.”

Bell said the center was starting the garden in hopes to teach not only the students at the center the fundamentals of growing your own garden, but also encourage the community to become involved.

Bell said a lot of support for the project had come from Troy Mayor Jason Reeves, and said any others who wished to take part were more than encouraged to come and help.

“We are an non-profit organization, and a lot of people here who don’t know that,” Bell said. “Whether it’s donations of seeds or anything like that, we encourage them to bring them to us. Donations are definitely accepted.”

Larry Percy and Ted Metz talk during an Art Talk at the Johnson Center for the Arts.MESSENGER PHOTO/THOMAS GRANING The... read more