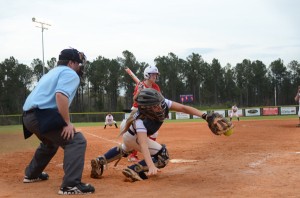 The Lady Patriots (22-7), who have been tearing through its competition up to this point in the season, have shouldered a heavy load of almost 30 games already, and injuries are finally starting to affect the team.

Last weekend, Pike was forced to pull out of the Macon-East tournament after three players, Sam Yarbrough, Bailey Rushing and Kayla Dendy all sustained injuries that left the team short-handed.

“If we would have went (to the tournament), it would have just been detrimental to us,” Park said. “Physically and mentally we needed a break. (Bailey) Rushing has a stress fracture, and she was in a full cast. The next day we were supposed to go to their tournament, we had to pull out. Sam Yarbrough pulled her quad, and Kayla (Dendy) got hit in the eye with the ball. Three of the starters were injured. There were not enough players to go.”

Although it was disappointing to have to pass on the tournament, the Lady Patriots’ fourth tournament already this year, Park and her team were more than happy to take the extended break and recover for the final stretch of the season.

And after nearly a week off, Park said her team is feeling well rested and anxious to get back onto the field.

“I just think that really it (fatigue and injuries) is from being overworked and playing a lot,” Park said. “All of my kids really work hard, and they put their best efforts into practice. The combination of that put a lot of stress on us. We’ve been winning, but needed a break.”

And winning will certainly soften the blow of a team being sidelined with injuries.

For the third week in a row, the Lady Patriots are ranked No. 2 in the AISA softball polls, one spot behind No. 1 Macon-East.

But with her team taking time off for some much needed rest and recovery, Park said she expects big things out of Pike softball going into the end of the season and the postseason.

“I think that we are in a really good spot,” Park said. “Several of our players are injured, but I think Sam (Yarbrough) is better and Bailey (Rushing) got her cast off today and she is going to hit and throw a little this weekend and see how she feels. I’m excited to get back.”

After a long week off, the Lady Patriots will finally return to the field March 31 for a doubleheader at Escambia Academy.

With the final games of the regular season on the horizon, Park thinks her team is right where they need to be.

And now that Pike is rested, it is ready to make a run in the state tournament.

“This is by far the best year I think Pike has had,” Park said. “I think that they are really going to show up well when it matters. We’ve already been undefeated in area and region play. I’m sure we’ll do well, and I’m excited to see them play in state. They are all really deserving.”