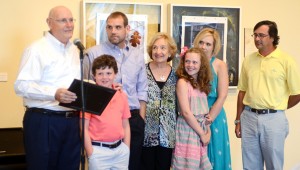 MESSENGER PHOTO/COURTNEY PATTERSON
Mack Gibson, far left, accepts a plaque with his family at the Johnson Center for the Arts at Donor Day Sunday.

Those recognized included Tom and Frankie Brantley of Dothan for their donation of the bronze and marble gallery plaques; Caleb Dawson of Troy for the construction of the new membership and donor wall cabinets; Angela Sarris of Regions Bank for the donation of a large framed mural titled “City of Troy, Alabama, 1989, South Side Square Looking East”; Steve, Jim and Harold Campbell and family for the upright piano they donated for use in The Studio; The Manley and Mary Johnson Foundation with Mack and Mary Gibson for sharing the cost of the hardwood floors in the Main Gallery and the Mack Gibson family for dedicating the Main Gallery and for their generosity and service to the organization.

Each donor was recognized individually with a plaque.

“We were just happy that we were able to have the part we’ve had to play in the arts center,” Mary Gibson said. “Mack has been with it from the very beginning, so that means that I came right along with him, so I have done a lot of volunteering to help with different thing like decorating for the Christmas and all sorts of things. It’s our privilege to name this gallery and to do the things that we’ve done for it. It means a lot to Troy, and we feel like that is so important.”

The Main Gallery has been renamed as The Mack Gibson Family Gallery.

“This has been a passion of mine and my family for many years,” Mach Gibson said. “It’s taken the help of all. It’s not just one person.”

Mack said that he named the gallery The Mack Gibson Family Gallery to show his family and grandchildren that it is important to give back to the community.

“Those who have much, must give back,” he said. “I wanted my family and grandchildren to know that when someone does this, it carries on for all generations.”

The Mack Gibson Family Gallery was filled with people from the community as well as Al Head, executive director of the Alabama State Council on the Arts, who drove from Montgomery to attend the event.

“The center is a wonderful resource and asset for Troy and its such a great example of so many giving, committed people in Troy who have done so much to make it a reality,” Head said.