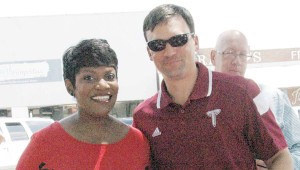 The reception for Troy University head football coach Neal Brown at Brown Bag on The Square Thursday was akin to that of a rock star.

“Are we ready for football or what?” exclaimed WSFA-TV personality Terry, who was emcee for the event.

And, if the crowd’s response was any indication, then Troy and Pike County are ready for football.

Terry, a Troy native, said Troy is the sweetest and best little hometown and “I’m so happy to be a part of this celebration.” 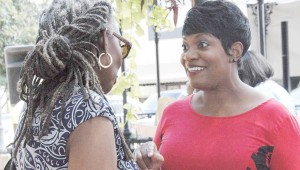 Troy Mayor Jason A. Reeves welcomed the crowd, which was perhaps one of the largest ever for the Brown Bag lunches. In thanking everyone for coming, Reeves said events like Brown Bag are “what community is all about.”

Allen said Thursday was a great day and thanked the city for the invitation to participate. “And, it’s a great time for football,” he said. “I expect good things from the Pike Liberal Arts Patriots this season. We had a good year last year and hope to have an even better season this year.

McCoy also thanked the City of Troy for the opportunity to be a part of the football kickoff on The Square.

“This is awesome,” he said. “We appreciate the community’s support of high school football. We have a good working relationship with Troy University and we also appreciate that.”

As for the upcoming season, McCoy said the Trojans have 13 seniors, but they lost some good players from last year and those shoes will have to be filled.

“We’re young but we’ve worked hard and we’re coming along,” he said. “Our first game will be on the road and we’re ready to get the season underway.” 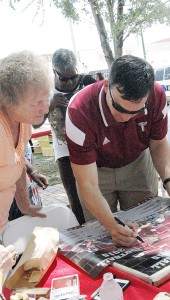 Brown expressed his appreciation to the fans for coming out and to the City of Troy the way the downtown square has come alive with restaurants and places to shop. Then, his remarks were all about football.

“It is here,” he said of the football season. “The buy-in factor of our players has been extremely high. As a new coach, I worried how I would be received. Whether the seniors would be open minded and accept the changes. But to a man, they have been accepted the changes and with a great attitude.”

Brown said he has been asked how many games the Trojans can be expected to win.

“I don’t know how many games we’ll win but we’ll be exciting to watch and we’ll play the right way.”

Brown said his challenge to the players is “to own our home stadium.”

“When the Trojans were winning five conference championship, they were dominate at home and we’ve got to be dominant in our stadium.”

And, Brown said the dominance should not just be on the field. It should be in the stands as well.

Shelia Jackson, Troy director of public relations, said Thursday’s Brown Bag event was what community is all about.

“We came together as a community to support our local schools and our university,” she said. “I think everyone there was a fan of every school there. So, on Friday night, go out and support our football teams, our bands, and our cheerleaders. Let them know they are appreciated and you’ll have a great time as you do. There’s nothing like a football Friday night or a Saturday at the stadium so ‘Go, team! Go! Fight! Win!’”