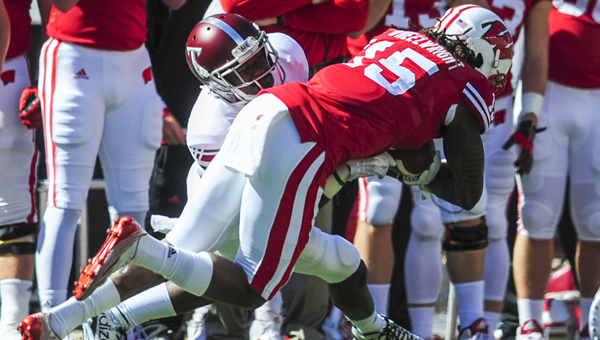 Photo/joey meredith
The Troy Trojans fell to the Wisconsin Badgers 28-3 on Saturday afternoon. The Trojans will head into the bye week and will have two weeks to prepare for South Alabama.

The Troy Trojans enter their bye week 1-2 after a 28-3 defeat at the hands of the No. 24 ranked Wisconsin Badgers Saturday afternoon.

Despite the loss, Brown said he is proud of the Troy effort. “I’m proud of our guys. They’re obviously disappointed. Anytime you put that much time and effort into something like we do each week, the staff and the players – I want them to walk out of here with their chest out,” he said. “I thought we competed and played really hard.”

The Trojans had a chance to take the lead late in the first half but couldn’t get the ball in the end zone. After a Trojan punt down to 10 yard line the Badgers went on 90-yard scoring drive capped off by a four-yard touchdown run by quarterback Joel Stave to push their halftime lead out to 14-3. That was the closest the Trojans would get all afternoon.

The defensive stand by the Badgers followed by the 4-yard touchdown run for Stave changed the momentum in the first half. The Trojans were moving the football with relative ease in that late first half drive but an offensive pass interference penalty slammed the breaks on the Trojan momentum.

The defense tried to make a stand but Stave had other plans, running around the right end for the second touchdown of the game for the Badgers.

“That was tough. I thought we had two edge runs rights there where we were in position and maybe some calls didn’t go our way. But that was a big momentum,” Brown said. “I think it was 7-3 at that point, and if we could’ve held them to a field goal …”

The Badgers scored the game’s first points when Dare Ogunbowale capped off a six play 81-yard drive when he ran the ball in from 17 yards out to give the Badgers the early lead.

The Trojans marched down the field in their next possession, going 65 yards on 12 plays ending with a 32-yard field goal by Ryan Kay to put the Trojans on the board for the first and only time of the game.

Throughout their fall camp, the Trojans worked on an up-tempo offense, hoping to you use it regularly once the regular season started.

After running it a good bit in their first two games of the season the Trojans ran the up-tempo offense a handful time against the Badgers.

“We picked and chose when we were going to go tempo. I thought we were effective with our tempo plays. We didn’t want to do it until we had a first down within a series. That’s the only thing that we did, thinking tempo-wise going into the game. What I didn’t want to do is our defense had played a lot of plays; I didn’t want them to play those type of snaps versus that big of a front,” Brown said. “We didn’t back off our tempo. I think we hit some really good tempos. It was effective when we got first downs. That was really the only thing that we changed from a game plan perspective.”

The Trojans came out in the second half and had an opportunity to once again close in on the Badgers.

On their opening drive of the second half the Trojans marched to the Badger 25-yard line before Brandon Burks fumbled.

Brandon Silvers finished the afternoon completing 23 of 34 passes for 174 yards. Burks moved into 17 place in Troy history with 1,405 yards rushing after he picked up 62 yards rushing on Saturday.

Jarvis Bentley also had a career day in the loss to the Badgers. Bentley finished with career highs in completions with 8 and in receiving yards with 58.

The Trojans now enter their bye week and will have two weeks to prepare for their Sun Belt opening against in state rival South Alabama. Kick off is scheduled for 6 p.m. Oct. 3 at Veterans Memorial Stadium.