Next level: Murphy signs with Wallace Community College of Dothan 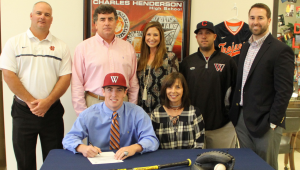 Jackson Murphy knew every time there was a roar of the crowd in Veterans Memorial Stadium Saturday that Troy University had done something good, but unlike the 21,763 in attendance, the Charles Henderson High senior was just over a quarter of a mile away as the crow flies, working in a batting cage alone, working on his swing, working to fulfill a dream.

That dream became a reality Tuesday morning as the CHHS senior catcher signed a scholarship to play baseball for the tradition-rich Wallace Community College of Dothan, with family, friends and teammates present.

“When I get up every morning I dream about this day, about getting to the next level” said Murphy. “I always would think of (former CHHS catcher) Chase Smartt and how he put a lot of work in. I’ve tried to fill his shoes, and those are big shoes to fill. I’ve done my best to do that, and I’ve got one more year to fill them some more.”

Wallace of Dothan has won 15 Southern League championships, and many of their players have advanced to play Division I and Major League Baseball.

Head Coach Mackey Sasser also played catcher for Wallace and later the New York Mets, and this was a factor that influenced Murphy.

“I want to thank the other schools for offering me the opportunity, but what got me to Wallace was that Coach Mackey played in the pros as a big-leaguer, he was a catcher, I’m a catcher, and hopefully he can progress me as a player to get to the next level,” said Murphy.

Governor’s Assistant Coach Phillip Hurst knew he was getting a hard worker and solid athlete in Murphy.

“First and foremost, he is a great kid,” said Hurst. “He has great character and everything about him is what we are looking for at Wallace. Obviously he has the athletic ability to play catcher, and that was a need for us this year going into 2017 and 2018. Jackson definitely fits that need for us. He had a great year last season at Charles Henderson, and we are looking forward to getting him on campus and helping us win a state championship.”

Murphy had a strong season as a junior catcher last season for the Trojans, hitting .401 with seven homers, a .657 slugging percentage, .489 on base percentage, 37 RBI, a 1.117 OPS and an impressive .985 fielding percentage.

Traditionally CHHS turns out one or more young men that sign baseball scholarships, and first year Head Coach Josey Shannon hopes other students will look at Murphy as an example of what hard work and dedication will achieve.

“Obviously I have nothing to do with this great opportunity he has, as he has done it on his own,” said Shannon. “But I want everyone to try to understand what this feels like, to achieve an accomplishment you set out for. A lot of times when some players and kids are out running the roads and doing a lot of different things, Murph is up here hitting in the cage and doing different things to better himself. That is what hard work looks like, and it is just the beginning of his career. I am proud to be his coach, and for all of these guys, I am looking forward to being their coach and our team having an outstanding season.”

CHHS Principal Brock Kelley sees many students move on to great things, and as a former catcher himself, he sees the potential in Jackson.

“Seeing someone that takes the position of catcher and utilizes their skill the way he does is impressive,” said Kelley. “I’ve told several people that whoever signs Jackson is getting a great player. I think Wallace is going to be better off by signing Jackson.”