End of the line: Eagles finish season with loss to the Indians 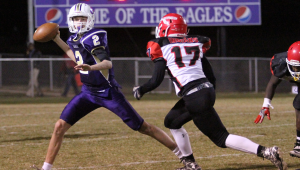 GOSHEN – A pair of explosive Southern Choctaw running backs proved too strong for Goshen Friday night, in a 34-14 AHSAA Class 2A second round state playoff win over the Eagles.

Sophomore Deontae McGrew rushed for 192 yards and two TD’s, while JaJuan Tavares gained 104 yards and a touchdown to lead the seventh-ranked, 10-1 Indians.

Goshen Head Coach Bart Snyder knew Southern Choctaw would bring a strong running attack, but he was proud of his Eagles for the effort they put forth this season.

“Southern Choctaw is a very good ball team with very good running backs,” said Snyder. “They ran the ball extremely hard, one of the best downhill running teams we have played all year. The scary thing about it is those guys (McGrew and Tavares) are just 10th graders. They’ve got a bright future. But the good thing about it is our seniors did an outstanding job leading us to an 8-4 season. Their leadership on and off the field got us to the second round of the playoffs. You don’t play a bad team when you get this far. I would have loved for it to have gone a little better. But I’m proud of our guys and our coaching staff for what they have done.”

It took only three plays for the Indians to score, moving the ball 53 yards with Matthew Hill taking it in from seven yards out and Claudarius Pearson adding the extra point for the 7-0 lead.

Hill scored again from two yards out with 2:10 left in the first quarter for a 14-0 lead, but Goshen cut the score to 14-7 when junior quarterback Brock Snyder hit Zack Alford for a 28-yard TD pass, and Brian Redmon added the extra point just before the half.

Tavarez accelerated for a 32-yard touchdown run and a 21-7 lead in the third quarter, and on the next possession McGrew went 63 yards for the score and a 28-7 Southern Choctaw advantage.

On the first play of the next series, Snyder again hit Alford, this time for a 64-yard bomb, and Redmon kicked the extra point to cut the lead to 28-14 with 5:33 remaining in the third quarter.

Each team swapped possessions several times before McGrew scored from 17-yards out, the extra point was no good, and the Indians led 34-14 with 3:43 to play in the game, which they held onto for the final.

Goshen posted an 8-4 record with only five seniors, and will return 33 players next season off of this year’s roster, 16 of them being seniors next year.

“We started the season with only one player with offensive line experience,” said Coach Snyder. “We built on that, and every one of those guys will be back next year. I think we will build on all areas, offensive and defensive. At times we had a seventh grader out there and he did a great job. I just hope they will continue to work hard in the class room and in practice and we will get there.”

Goshen was led Friday night in rushing by Snyder with 46 yards Alford ran for 32, while Snyder passed for 137 yards and two touchdowns.

Bulldogs fall to Admirals in playoffs

The Pike County Bulldogs’ season came to an end Friday when they fell to Bayside Academy 24-7 in the second... read more