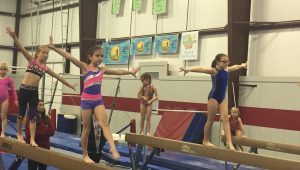 Twenty-five members of the Troy Extreme Gymnastics team have spent the last four months practicing and competing in qualifying meets. During the six meets, the 24 participants all qualified and will have their chance to represent Troy at state.

“It’s really exciting,” said head coach Sydney Covington. “This is my second year going with Xtreme. As a coach it’s very rewarding. I starting working with these girls in January, and we have spent all year training.”

The Troy team will consist of gymnast that age anywhere between 5 and 12 that are part of four different levels.

Troy has participated in two meets in Montgomery and Birmingham and team members also competed in Tuscaloosa and Orange Beach.

“I think they are enjoy it, especially when the perfect something that they have been struggling on,” Covington said. “For me as a coach just watching them get excited about learning something new makes coaching that much more enjoyable.

“They love doing it and getting new skills, especially ones that will help them at the next level. They loge getting challenges as much as I love giving them.”

The 24 gymnasts will compete in different events throughout the weekend. Each gymnast will have the opportunity to take part in the vault, balance beam, bars and floor.

Eagles too much for Highland Home

The Goshen Eagles began their 2016 campaign with an easy 83-38 win over Highland Home on Thursday. “There will always... read more