The perfect evening at the Piddle Around theatre 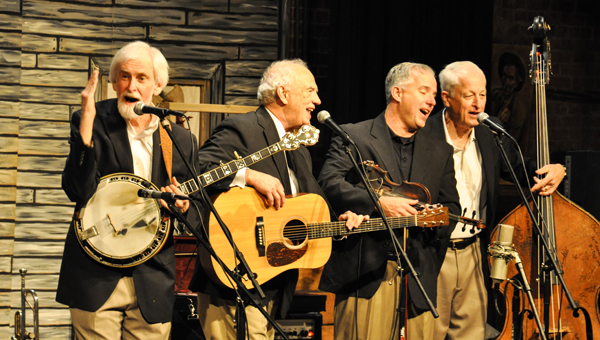 Larry Mobley of Ozark and his wife, have attended the Chili County Christmas event several times and also the theater’s signature event, “Come Home, It’s Suppertime” and June Buggin’ and they rated Three on a String “right at the top.” “We had never seen them before and didn’t know what to expect,” Mobley said. “We got a lot more that we could have ever thought. It was a great show in a great theater.”

Nationally acclaimed storyteller, Andy Offutt Irwin said the We Piddle Around Theater in Brundidge is what the Cracker Barrel tries to be. “It’s real.”

All of the warmth and humor of the 1940s theater was gift wrapped and delivered in time for Christmas by “Three on a String” Thursday night.

Attending a “Three on a String” concert in the Works Progress Administration building and in a town of 2,000 had many in the packed house asking, “How did Brundidge get entertainment like this?”

For Sara Warren of Enterprise, the fabulous “Three on a String” trio of four was no Christmas surprise.

“I have never been disappointed in a presentation at the We Piddle Around Theater. They are all outstanding and ‘Three on a String’ was a good as it gets,” Warren said. “I’ve never laughed so much and the music was outstanding. I liked the menu—chili, pear salad that reminded me of Mama and lemon pie. All in all, we could not have asked for a more perfect night of entertainment.”

“This place, what a place,” Ryan said. “Bobby (Horton) told us we would love this theater but I didn’t expect this. It’s fantastic. I can’t wait to come back.”

Bobby Horton has performed at the We Piddle Around Theater several times with Birmingham’s popular storyteller Dolores Hydock. Andy Meginniess has played with the Herb Trotman Band at the Peanut Butter Festival in Brundidge.

“I knew about the fun festival but this is a surprise,” Meginniess said of the theater. “It’s like nothing else. Nothing else.”

Brad Ryan, one of the three, said the historic theater is a great place to play or just to be. “This is the kind of place you hope to play again,” he said.

Bennie Jinright of Troy said if she has anything to say about it, “Three on a String” will be back or she’ll hunt them down.

“I’ve never seen so much talent. Never,” said Jinright, who attended with other members of the Troy Health and Rehab Advisory Board. “Cheryl (Dichiara) said she and Mickey saw “Three on a String” when he was in medical school. They have been around for 45 years and it’s easy to see why.”

Those in Jinright’s group were ages 22 to 78 and some of them had never been to the We Piddle Around Theater and really didn’t know what to expect.

“But every one of us came away having had a “wonderful, divine time,” she said.

As did Sue Richards of Brundidge who echoed Jinright’s praise of the trio.

“The combination of voices, instruments and humor was excellent,” Richards said. “It was a perfect evening with such a crossing of interests. It was extraordinary for the Brundidge Historical Society to bring such a combination of talents to our theater.”

Richards said she was able to step back in time with “Three on a String’s” comedy routine about a high school pep rally years ago.

“I was there and I was one of those cheerleaders,” she said, laughing. “I’ve seen those coaches that couldn’t spell a five-letter word. So funny. And, then the performance was nostalgic, too. The mingling of Christmas songs was so appropriate. I’ve never been to a better performance … anywhere.”

Member of the Bulldog Beat student newspaper staff are pictured in the PCES shirts that identify them as members of... read more