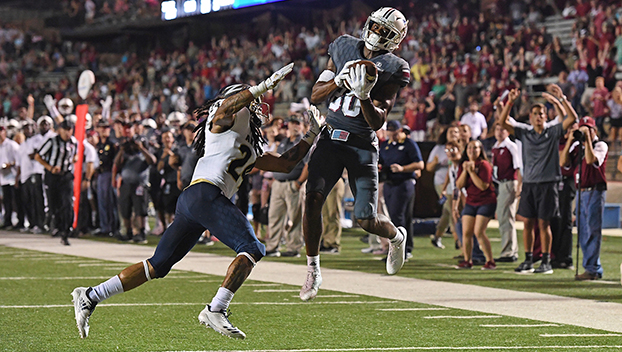 Troy receiver Deondre Douglas has returned as one of Troy’s top receivers in 2017 and he is now enjoying success both on and off the field.

The junior receiver got off to a slow start to begin the season. In the first two weeks, Douglas tallied five catches for 40 yards. Against the Aggies he rebounded for seven catches for 101 yards.

“It started with trust in God and my faith,” Douglas said. “Before the game (against New Mexico State), I was praying– all week I was praying and I focused in. The two weeks prior, I wasn’t as focused in as I should be.”

Douglas remained focused this Saturday against Akron when he caught seven more passes for 92 yards and the game-winning touchdown.

While a lot has happened on the field for Douglas, he has been quite busy off the field as well. After meeting with teammates such as Josh Anderson, Douglas became a Christian.

“I became a Christian and turned my life over to God,” Douglas said. “I have always been spiritual, but I was lost and I found it.”

“Josh Anderson has been with me for all of the spiritual background,” Douglas said. “He is very knowledgeable and he is teaching me more things every day.”

Anderson said he is happy for his friend and teammate.

“We kind of rekindled our relationship since the season has started,” Anderson said. “We’ve been talking a lot, with the help of some other guys who were behind the scenes. Really, it’s been good. He gave his life to Christ a few weeks ago. It’s been exciting. I know he said his play has increased and that has been evident throughout the course of four games.”

Douglas has shown a different attitude in practice since that day about two weeks ago. He has shown more heart and a willingness to work hard.

“Off the field, I thought he did a really good job sharing some of his testimony,” said head coach Neal Brown. “On the field, it’s really been about his practice habits. And he’s played better away from the ball.”

“It’s increased– and it wasn’t so much God saying, ‘OK, you’re for me now. I’m going to give you this talent.’ It’s not that way,” Anderson said. “It’s always been him, but his motivation and focus has changed, his work ethic– everything has increased. He’s playing for something different now, other than himself.”

After being held out of the end zone during the first three weeks, Douglas’ game-winning touchdown was also his first touchdown of the season, giving Trojan receivers two on the year.

“It feels great,” Brown said. “It’s definitely a great feeling to get into the end zone. We have been waiting on the receivers to get in the end zone. Damion (Willis) got one last week and I got one this week. We are going to continue to get everybody there.”

Douglas and the Trojans will be back on the road on Saturday when they take on another power five opponent in LSU.

Late-game heroics: Trojans get late touchdown to knock out the Zips

It wasn’t pretty, but the Troy Trojans pulled out a late victory over the Akron Zips on Saturday thanks to... read more