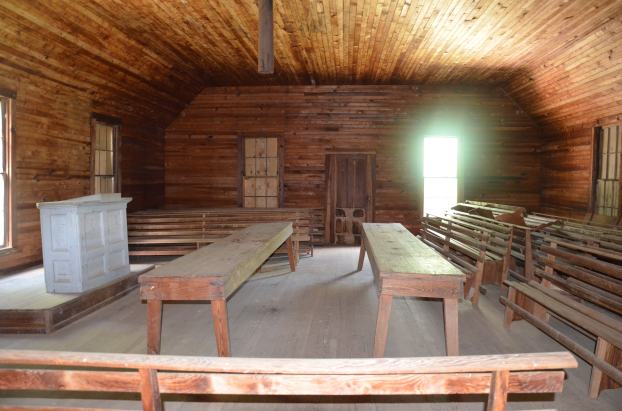 If Thomas Wolf’s belief was right, then you really “can’t go home again.”

But, if mistaken, even slightly, then going home again just might be possible.

On Sunday, August 16 in the hinterlands of northeast Pike County, a group of believers will gather at historic Concord Primitive Baptist Church in China Grove to “go home again.”

The third Sunday in August is the traditional date for homecoming at Concord Primitive Baptist Church. And those who come have strong ties to the church and to the community – “the ties that bind.”

“All of us with ties to the church, to the China Grove Cemetery and to the community look forward to homecoming each year,” said Marsha Boutwell. “There’s just something special, something so meaningful, about gathering on the church grounds, under the old oak trees and sharing memories and stories with friends.”

As with all homecomings, there’s dinner on the grounds and there’s also a short business meeting related to the upkeep of the cemetery.

There’s always plenty of time for fellowship and a visit to the cemetery to remember and honor those whose lives were connected in some way to the church and the community, Boutwell said.

The church and the community are steeped in local history.

“China Grove was one of the first settled areas in Pike County,” Boutwell said. “Based on that, it is believed that Concord Primitive Baptist Church was established by the mid-1800s. The first church building would, in all likelihood, have been constructed of logs that were probably from trees cut on the property.”

Unfortunately, no known records of the church have survived.

“The present building was built prior to 1900 and is called ‘the house’ – not the church,” Boutwell said. “I would suppose that’s because, in the early days, churches were often called the ‘church house.’ Those of us with ties to Concord Primitive Baptist Church call it ‘the house.’”

When the church was built, there was no money to seal the building.

“Money was tough back then,” Boutwell said. “Most of the people were farmers and they had few resources. So it was not until around 1900 that the church was sealed.”

The construction of “the house” is unique in that it is one room with a ceiling that could be described as “primitively” vaulted. Whether that was done to improve the acoustics, for its aesthetic value or for some unknown reason, will perhaps never be known.

“The church benches are rather unique,” Boutwell said. “They are made of wood slats and most of them are about 16 feet long. This was a Primitive Baptist Church, so the men sat on one side of the church and women sat on the other. There are shorter benches that were probably built for particular spaces or uses. The church held a lot of people and they sang without accompaniment. I imagine the walls of the church vibrated when they sang.”

The congregation would have sung the hymns of Charles Wesley, Isaac Watts and other composers of hymns. Songs would have included “Arise My Soul Arise” and “Come Ye That Love the Lord.”

Boutwell said the sermons surely were of the “fire and brimstone” kind.

“I would have loved to have attended one of those early church services in that wonderful ol’ church,” she said. “But no services have been conducted in that church for at least 75 years.”

Because of the close connection between the church and cemetery and the community, the cemetery became known as the Concord/China Grove Cemetery.

The cemetery was in existence even before the church. Boutwell said people had to have a place to bury their loved ones so cemeteries were necessary. One grave in the cemetery was dated 1851.

African American men and women, Confederate soldiers and World War II veterans are buried in the Concord/China Grove Cemetery. Baby boys and baby girls are buried there along with those whose lives were long. There are graves in the cemetery that are marked only by stones or hand-made bricks – “known only to God.”

On the third Sunday in August, those connected with the church, the cemetery and the community will come together and fellowship with dinner on the grounds. The “house” and the cemetery are taken care of by this group.

“It’s a labor of love,” Boutwell said. “It’s important to us and those who come after us, that we maintain and protect what our ancestors left in our care. It’s important that others take up the torch and carry it forward.”

BAND CAMP: Sound of the South rehearses for upcoming season

Members of the Troy University Sound of the South hit the intramural field on campus Friday evening to rehearse sets... read more