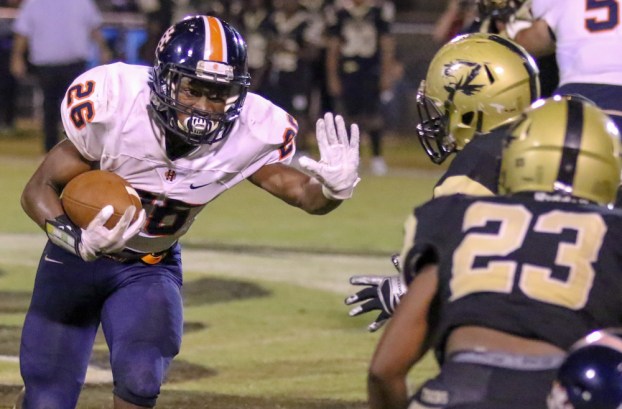 GREENVILLE – Senior quarterback Javion Posey accounted for five touchdowns to lead seventh-ranked Greenville to a 42-17 win over Charles Henderson High Friday night in Greenville’s Tiger Stadium, passing for 177 yards on four touchdowns and running for another, while senior running back Arick Boggan rushed for 163 yards and one TD against the Trojans.

It was a tough Class 5A, Region 2 setback for the Trojans, as they fall to 1-4 overall and 0-3 in Region play.

Greenville wasted no time getting on the board when Boggan took the handoff of the first play from scrimmage and exploded up the middle for an 80-yard touchdown carry. Jesus Alvarez added the extra point for the 7-0 lead.

The Tigers went up 14-0 on a 26-yard touchdown carry by Posey, and Alvarez kicked again right before the first quarter ended.

CHHS got on the board with 9:53 remaining in the first half when Caleb Guice booted a 32-yard field goal to make the score 14-3.

Greenville responded with an 80-yard touchdown drive, culminating on a 9-yard pass from Posey to Jalen Collins for a 21-3 lead with 7:27 to go in the half.

CHHS quarterback Pooka Jones connected with Sean McKinney for a 21-yard touchdown play, Guice added the extra point, and the score was 21-10 just before the half ended.

Posey completed another touchdown pass to put the Tigers up 28-10 in the third quarter, hitting Boggan for an 18-yard pass play.

On their next possession Posey threw another touchdown pass, this one to Christopher Bedgood, covering 22 yards and putting the Tigers ahead 35-10.

CHHS responded with a touchdown on their next possession, when Jones hit D.Q. Toney for a 32-yard pass play to make the score 35-17 with 1:47 to play in the third quarter.

Greenville scored its final touchdown just before the third quarter ended when Posey connected with Bedgood once again, this time on a 77-yard strike, for the 42-17 lead, which held up to be the final.

Jackson Giles led all CHHS receivers with four catches for 87 yards, while McKinney had two catches for 20 yards and a TD.

Jones put the ball in the air 37 times, completing 17 passes for 279 yards and two touchdowns.

The Trojans return home next Friday night, Oct. 12, when they play Carroll of Ozark for another Class 5A, Region 2 contest.

Eagles to play with a sense of urgency tonight against Luverne

The Goshen Eagles hope to snap a two-game losing streak when they host rival Luverne later this evening. Despite a... read more