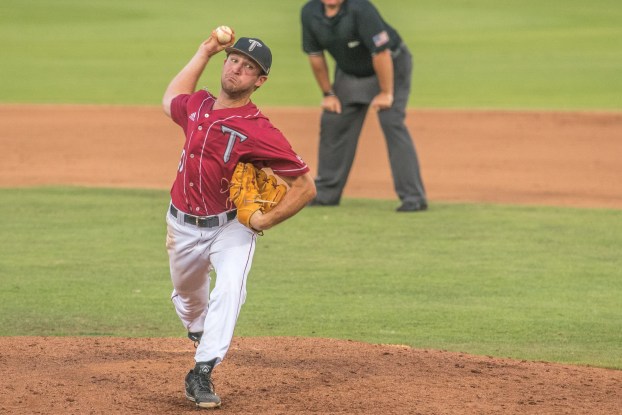 Photo/Jonah Enfinger Rush Hixon delivers a pitch against Duke during the Athens Regional in 2018.

Troy senior and former Pike Liberal Arts Patriot Rush Hixon is gearing up for his senior season with the Trojans.

After spending his first two years at Central Alabama Community College, Hixon made the transition back to Troy in his junior season. In year one with the Trojans, Hixon focused on enjoying each and every moment.

“I have been saying all year that I am trying to enjoy the ups and downs,” Hixon said. “I am looking forward to everything and going through the experiences again. Last year was a great experience all the way around, so I’m just looking forward to the highs and lows of the season.”

Hixon found a lot of success with the Trojans as a junior. Hixon appeared in 19 games with eight starts. In 49.2 innings of work, Hixon had a 5.07 ERA. His 45 strikeouts were good enough for sixth best on the team in 2018. Hixon fanned 10 batters against Georgia State in 2018, which was a team-best and a career high.

“I really just tried to stay myself,” Hixon said. “I kind of got away from that last year. I kind of lost some confidence in some things. Trying to get back to that this year and I feel like I am in a good place confidence wise and health wise.”

Troy head coach Mark Smartt agrees that Hixon is in a good place. Smartt believes his senior is throwing the best he has thrown throughout his career. Smartt believes that Hixon will eventually find a role in Troy’s bullpen and although he wasn’t quite ready to slot him into a specific role, the backend the bullpen looks to be the likely destination for the right hander.

“He did a little bit of everything last year,” Smartt said. “I think that was a product of a little instability in the middle of the year with a bunch of guys. He will start the year in the bullpen. In my opinion, Rush is throwing the ball better than he ever has in his career. He had a really good fall, he has had a great preseason. I really believe he is on the verge of doing special things.

With the help of new pitching coach Matt Hancock, Hixon agrees with coach Smartt and feels like he is in a really good spot heading into his senior year.

“Coach (Matt) Hancock gets a lot of credit for that,” Hixon said. “He came in and really tweaked some things with my mechanics and got my mechanics back to where it needs to be. I agree with coach Smartt, I feel like I am in as good of a place as I have ever been right now. I’m excited to see what happens this spring.”

Hixon picked up his first save as a Trojan after he pitched two innings of one-hit baseball against Little Rock.

Hixon has limited experience closing games at both the high school and junior college level.

“So far, I have loved being out of the bullpen,” Hixon said. “I will do whatever I need to do to win and contribute to the team. It feels good; it’s natural, I did it in high school a little bit and closed a few in junior college. I am excited to get to do it. It gives me a chance to throw more than once a weekend, hopefully.”

Hixon and the Trojans will begin the 2019 season on February 15 when they host Central Michigan.

As of right now, a hearing to determine the eligibility of CHHS senior standout Maori Davenport is still scheduled to... read more