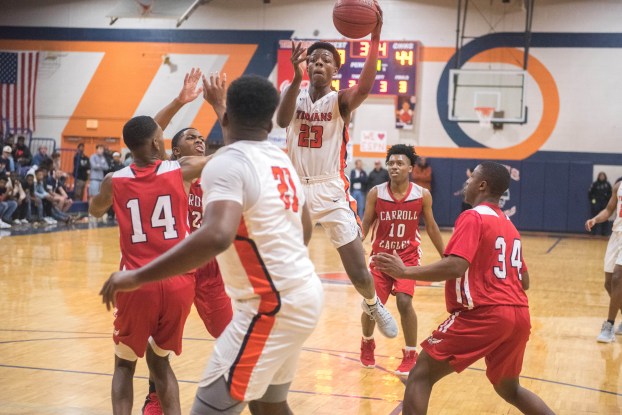 Messenger Photo/Jonah enfinger Terrell Sistrunk looks to pass the basketball to teammate Keonte Brantley in a game earlier this season.

The Charles Henderson Trojans boys’ basketball team is heading to their second consecutive Class 5A regional semifinal on Saturday after they knocked off Tallassee in the sub-regionals on Tuesday night.

The Trojans will take on defending Class 5A state champion Sylacauga.

“It’s an accomplishment and it’s something you set out for at the beginning of the year,” said head coach Doug Branson. “Getting to the regionals was something that got accomplished last year. This year’s team wanted to get to the same level and move beyond. We have made it to the regional, but nobody is satisfied.”

The Trojans have had a goal all season to get at least 1 percent better than they were the day before. The Trojans steam-rolled their way through the area tournament before knocking off Tallassee on Tuesday. Branson believes it’s a testament to their work ethic and their willingness to play for the school, the town and themselves.

When the Trojans made the regionals a season ago, they played at the Dothan Civic Center. This year’s game will be held at Montgomery’s Garrett Coliseum and even though it’s a new environment for his players, Branson doesn’t believe it will play that large of a factor.

“You try not to make a big deal out of that,” Branson said. “You don’t want to talk about it much. The arena is what you make of it and if you go in there wide-eyed and nervous, it can affect you. If you go in there understanding that the other team is getting to play a new team also, then it’s just another basketball floor.”

Sylacauga came into the postseason as the Class 5A Area 7 winner. They knocked off Woodlawn 56-49 in the sub-regionals on Tuesday.

“From what I have seen on film they have quality guards that can shoot the basketball,” Branson said. “They have a big inside that is really big that they throw it to in the middle. It’s a good basketball team that is going to present challenges. Everybody at this point is good and everyone is looking forward to playing. Hopefully we can go up there and put our best foot forward.”

When baseball season begins later this evening, the Troy Trojans will begin a journey to what they hope is a... read more