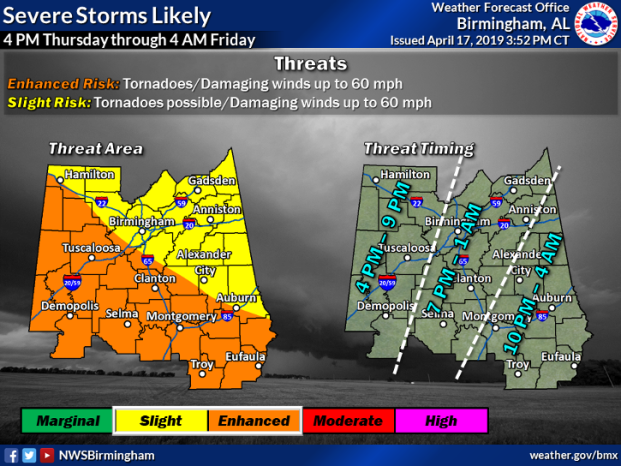 With just hours to go until severe weather hits Pike County, officials are bracing to deal with the aftermath.

“We’re on standby,” said EMA Director Herb Reeves. “We’re opening the emergency operations center tonight monitoring and watching to see what we’ve got. The City has made adjustments in schedules for first responders. We’re at the point where we’re just waiting to see what it’s going to do when it crosses the line now.”

The storms come just days after another strong storm system spawned tornadoes across the southeast, including an EF1 that carved through Troy early Sunday morning.

The National Weather Service issued a series of tornado warnings about a system pushing eastward across Louisiana, where strong storms covered much of the state.

Dozens of schools dismissed students early as a precaution in Louisiana, Mississippi, and Alabama, where the threat was expected to continue after nightfall. Government offices were also closed statewide in Louisiana.

Winds could be nearly as strong as during a hurricane, forecasters said.

No significant structural damage was reported, but heavy rainfall caused flash flooding that prompted the shutdown of Interstate 30 in central Arkansas and the closure of several schools around Little Rock.

As the storm system works its way to Alabama, Reeves said the Troy Recreation Center and Trojan Center will be opened at 7 p.m. for people to be in a safe area.

Parks and Recreation Director Dan Smith said he had already received several phone calls from citizens asking about safe shelter in the storm.

“I’ve gotten several calls from people in the Hunter’s Mountain area as well as other citizens that are looking to stay in the shelter tonight,” Smith said.

Multiple mobile homes were damaged or destroyed at Hunter’s Mountain Mobile Estates during the Tornado Sunday.