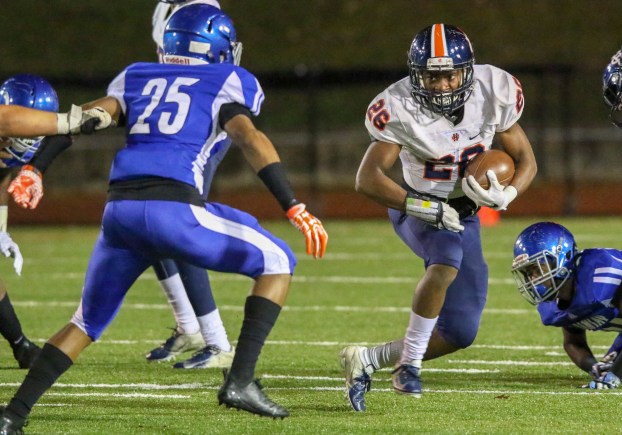 Photo/Dan Smith Jonathan Carter runs the ball for the Trojans.

The Charles Henderson will wrap up what has been a smooth spring this Wednesday in the Troy Cable Spring Classic.

The Trojans have been practicing for the last couple of weeks and head coach Brad McCoy has liked what he has seen out of his experienced group.

“We have had a good spring,” McCoy said. “We have given a lot of kids work. We have been excited about seeing the young guys get a lot reps. We have a lot of guys coming back, so I think this spring has been a lot smoother than in years past.”

The reason for the smooth practices may be due to the fact that they are bringing back a healthy amount of returning players. McCoy will be returning eight players on both offense and defense.

“We have been working all offseason trying to solidify certain positions,” McCoy said. “Spring practice has been smoother from that standpoint for sure. The younger guys, like the eighth graders, have been able to come along and watch these guys work. I think even their learning curve has been less because they are seeing these guys operate at a fast pace. It’s been nice to have.”

One of the returnees on the offensive side of the ball will be quarterback Pooka Jones, who made his return to the Trojans a year ago after taking time away from the sport.

“We have the quarterback back in Pooka Jones,” McCoy said. “We have a younger guy in Cam Foley that has gotten a lot of reps in the number two spot.”

The Trojans also are welcoming back running back Jonathan Carter, several receivers and three of the five offensive linemen.

“On offense, we have a lot of guys that we are not having to replace, guys that have been in our system for a couple of years now,” McCoy said. “We feel better about what they know how to do. I think they can practice a lot faster, not thinking as much.”

The defense will also return eight players to that side of the ball.

The Trojans will put all their work on display on Wednesday when they take on Callaway High School at Veterans Memorial Stadium in game two of the Troy Cable Spring Classic.

“Every spring we try to make sure that we schedule a very competitive, worthy opponent,” McCoy said. “This year is no different. We have Callaway, who finished 11-3 last year and went to the semifinals in the Georgia state playoffs. This contest is going to be tough. They beat Opelika this past season by a couple touchdowns. They have some highly recruited players on both sides of the football, so a very good football team.”