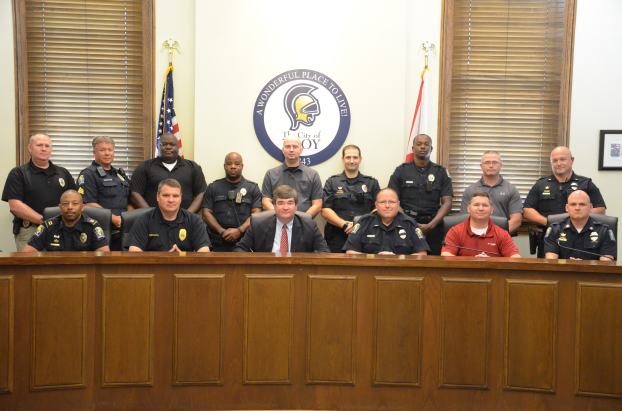 The City of Troy kicked off its celebration of police week Monday with a proclamation honoring the men and women who put on the uniform every day to enforce the law and keep Troy residents safe.

“What y’all do is so difficult and so varied,” said Mayor Jason Reeves. “You go into so many different situations. I think we’ve got the finest force anywhere. I appreciate what you do – you’re a special group of folks. It means a lot that I can lay my head on my pillow at night and know we have a fine group of officers.”

Troy Police Chief Randall Barr said officers never know what they may face when they go out on a call.

“It is an extremely difficult job, you know; we deal with some things that bring great pleasure and deal with a lot of things that bring extreme pain,” Barr said. “You never know from one call to the next what you’re going to be faced with, but you have to be prepared to face whatever … you have to be prepared you might be in a battle in the blink of an eye. You just never know what that next call may hold or what’s around that next corner.”

Wednesday, the City will hold a special observance for officers that gave their lives in the line of duty in a ceremony next to the monument right outside the police department that memorializes all Troy officers that died in service.

The police memorial ceremony will begin at 10 a.m. in the parking lot of the Troy Police Department.

The police force will wrap up the week by hosting the final leg of the Alabama Law Enforcement Torch Run Friday to herald in the special olympics.

Bazzell: Time for dual enrollment to be considered in school rankings