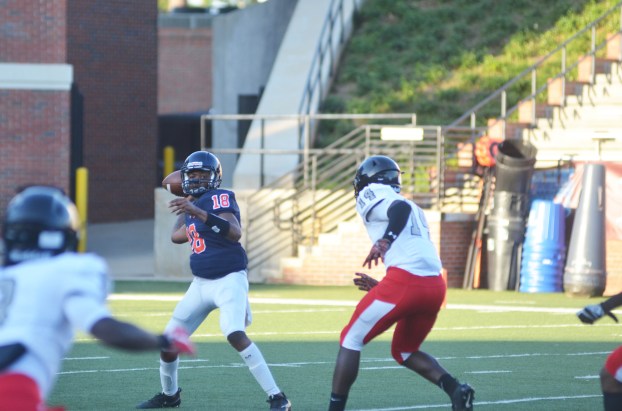 The Charles Henderson varsity Trojans knocked off Callaway 29-19 in their three quarters of play on Wednesday in the Troy Cable Spring Classic at Veterans Memorial Stadium.

The game featured the varsity playing the first three quarters, leading up to the junior varsity and middle school Trojans playing the final quarter. The Trojan varsity players won their game before the younger Trojans fell 14-0.

The Trojans entered the spring with a set of goals and by game’s end, they not only reached their goals, they exceeded them.

“In the spring, we have to be careful about looking forward to an opponent,” McCoy said. “Spring is about you improving with personnel and organization and not worrying about an opponent. We started looking at Calloway on Friday and got the guys prepared. Our main goal was improvement at each position and making kids better at the game of football. I think we really improved in every area.”

The varsity offense totaled 29 points and quarterback Pooka Jones led the way. Jones threw for 220 yards on 15 completions in three quarters of work.

“Pooka Jones had a really good night,” McCoy said. “I really think Pooka has grown and the game has slowed down for him. He really understands the concepts.”

The Trojans ran the ball 10 just times compared to throwing the ball 24 times in three quarters of play.

“We had to throw the ball and the receivers did a great job,” McCoy said. “I can’t say enough about our offensive line and pass protection. They had a challenge in front of them and they answered it.”

McCoy and the defensive staff was pleased with how well the defense flew around against Callaway.

With spring practice now finished, McCoy believes the strong performance in the game will bring a lot of momentum into the summer months.

“When our varsity guys came out at the end of the third quarter and they looked up at the scoreboard, I think with the challenge in front of them, they felt really good,” McCoy said. “I think we could not be going into the summer any better than how we are right now.”

“Today is a day of remembrance, of solemn reflection, and of resolve,” said Mayor Jason Reeves Wednesday at the 41st... read more