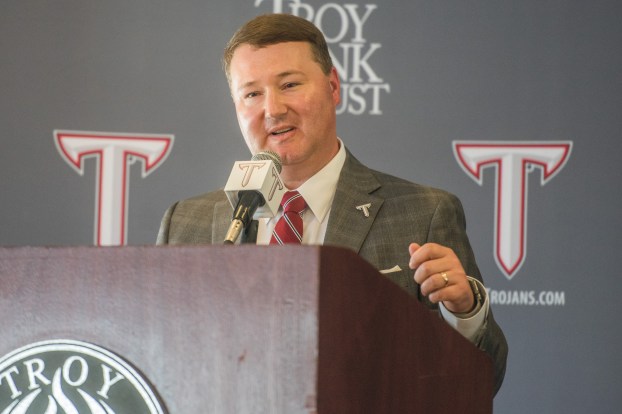 The Troy Trojans welcomed a familiar face to the podium on Wednesday when they officially announced Brent Jones as the new Director of Athletics.

Jones takes over for Jeremy McClain who left to become Athletic Director at Southern Mississippi in early April. Sandy Atkins served as interim AD since April.

“This is a dream job of mine,” Jones said. “This is a job I have wanted to have. I wasn’t sure I was going to have the opportunity, but when the time came, I was one of the six to interview. What we have been able to do the last two and a half, almost three years here and with the foundation that Jeremy (McClain) has laid, I felt like I was the right man at the right time to continue our mission forward.”

The interview process was done internally and not through a search firm. At the end of the process, Jones was named as Troy’s ninth Athletic Director.

“The applicant pool for this appointment was the strongest in our history,” said Chancellor Jack Hawkins Jr. “All six finalists were well-qualified, and I believe all six will become Division I ADs.”

After coming to Troy in 2017, Jones spent the first couple years being a part of the process. As of Wednesday afternoon, he is now the leading voice.

“I feel like I’m ready,” Jones said. “Over the last two and a half years I have been involved in almost every decision in the athletic department. I feel extremely up to date on what is going on and the transition should be smooth. It’s 24 inches over from one chair to the next, but we have a great staff in place and we need to continue to maximize their strengths and continue to move forward.”

“At the end of the search process, we realized the best fit for us at this time is Brent Jones,” Hawkins said. “Brent has a record of leadership success at the DI level, particular in revenue generation. He was a standout student-athlete, and he knows Troy University.”

Despite all the success over the last couple years, job one for Jones will be not only continuing that success, but continue to surpass it.

“Our fans are galvanized,” Jones said. “We set record levels in attendance, corporate sponsorships, fundraising and ticket sales. The momentum we have is real and we must continue that momentum.”

As for the athletic programs, the goal is a simple one for Jones.

“We will compete for championships,” Jones said. “We will do it with honor and we will do it the right way.”

Troy football coach Chip Lindsey worked with Jones at Southern Mississippi and is confident in Jones’ ability to lead the athletic program.

“I am really excited to work with Brent,” Lindsey said. “I think he is a great fit and I think he will continue to move our athletic programs in the right direction. He has a lot of energy and I think that is important for a guy coming in.”

Troy Men’s basketball coach Scott Cross hasn’t been on the scene for very long, but he has enjoyed working with Jones and is excited for the future.

“I’m super fired up about it,” Cross said. “If anybody asked me who I would want to work for, it would be Brent Jones. I have already established a great relationship with him.”

Cross believes that Jones shares his vision, something that is very important in the relationship between a coach and his athletic director.

“You know he wants you to be successful and as a coach, that is the most important thing,” Cross said. “You can feel that with Brent for sure. You also need resources and support and he is going to encourage everybody and he is going to do everything on his part to make sure that we have everything within our budget that can be done.”

Reports have surfaced that Brent Jones will be named the new Athletic Director of Troy University. Jones currently serves as... read more