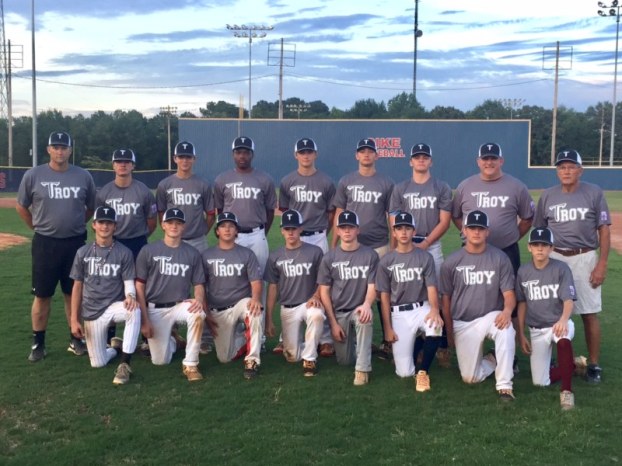 Submitted Photo The Troy 15U Tournament team was in action in the 15U State Tournament in Eufaula on Friday afternoon.

Troy 15U Tournament Team gets back on the winning track

The Troy 15U Tournament team bounced back from a loss on Thursday night with a 17-6 win over Eufaula on Friday afternoon in the 15U State Tournament.

An eight-run second inning was more than enough to vault Troy to a much-needed win on day two of the tournament.

Adrian Cardwell got the start in the game for Troy. Cardwell pitched the game’s first two innings. He allowed just one hit and struck out a batter. J.D Wilson and Danny Cooper also got on the mound for Troy.

One inning later, Troy busted the game wide open with eight runs. Troy picked up six hits in the inning including RBI singles by Adrian Cardwell, Huner, Jeff Warrick and Jordan. Ben Reeves also had a two-run double to bring the score to 12-6. Troy’s final run came around to score when Reeves scored on an error by Eufaula’s short stop.

Nate Braisted scored on a balk call to score a run in the third. By inning’s end Troy totaled three runs to go up 11-0. Kidd smacked a two-run double.

Troy allowed Eufaula to crawl back into the game with three runs in both the third and fourth innings to cut Troy’s lead to 13-6 after four innings.

After a scoreless fifth inning, Troy’s offense got back to work and scored four more runs in the sixth.

Troy will be back in action on Saturday when they take on Enterprise beginning at 9 a.m. in Eufaula.