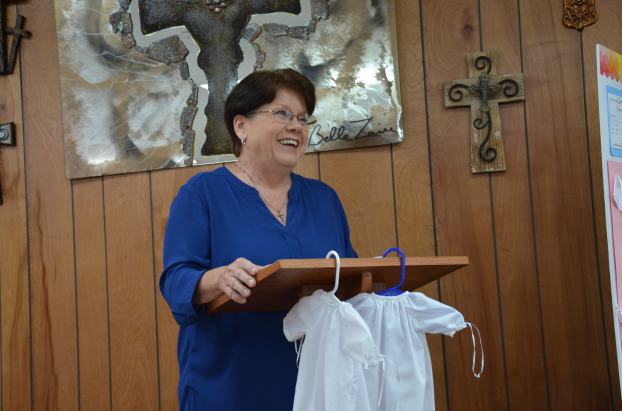 Sarah Black shares the story of Threads of Love with the members of the Brundidge United Methodist Women’s Morning Circle earlier this week. The program provides a ministry to parents whose infants die at birth.

Such a sad story. Such a sweet story.

The ladies at the Morning Circle at Brundidge United Methodist Church were visibly touched by the story Sarah Black told Tuesday morning.

Black is a member of Parker and Billy’s Threads of Love chapter at First United Methodist Church in Andalusia.

Threads of Love chapters provide a variety of items in packets for those babies born too early or too ill to survive.

Black said she was so touched by the Threads of Love story when she first heard it at her church, St. John Baptist Church in Tarentum, that she wanted to be a part of the ministry.

The seeds were sown there for a unique ministry opportunity for Black, one that was tailor-made for her.

“I didn’t know anything about Threads of Love but, when I heard a grandmother’s story about the loss of her twin grandsons, and what Threads of Love meant to their family, I knew I wanted to be a part of that ministry,” Black said.

That grandmother was Linda Trent, of Andalusia. Parker and Billy are her grandsons. Even though there would be no future memories of those little boys, Threads of Love provided clothes and other items to helped preserve the few precious memories there were for their parents and family.

But the story of Threads of Love began in a Baton Rouge, Louisiana hospital in 1993. A need was seen for tiny burial gowns for patients who were born prematurely and were too sick or too tiny to survive. Several ladies from a local church joined together in making little gowns and Threads of Love began.

Black said, at first, it was hard knowing that the gown she was making could be a burial gown for some parents’ baby.”

However, Black said she understands, at times like that, parents come to a hospital unprepared for what lies ahead.

“When there is a miscarriage or a baby is stillborn, Threads of Love has gift boxes available with a little white gown, a cap, blanket and a memory envelope,” Black said.

“Because there will be no birth certificate, the box will have an envelope with a prayer, a Recognition of Love certificate that records the baby’s name, delivery date and footprints. There will also be a lock of the baby’s hair.”

Black said the packets capture memories for the parents before they realize they need them and will cherish them.

“When a baby is lost, it is still a part of that family, especially, when there are other children, who want to know about the baby, about their brother or sister,” she said.

Each gown that Threads of Love donates has a heart monogramed on the front and each is made with loving hands.

“Parents don’t come prepared not to take their babies home,” Black said. “But 1,300 pre-mature babies are born each day. One in five pregnancies ends in a miscarriage. One in 115 pregnancies ends in a ‘still birth.’ It means a lot for nurses to have these Threads of Love gowns for the babies who survive and for those whose lives are lost. And, I can only imagine what the memory envelope will mean to the baby’s parents.”

The City of Troy Tourism and Public Relations Department hosted the annual “Countdown to Kickoff” on the square in downtown... read more