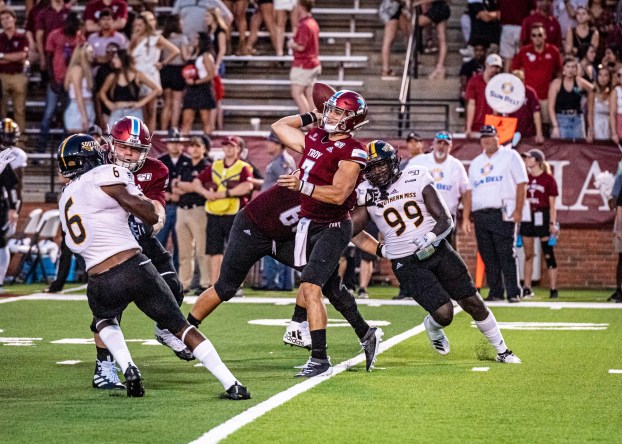 Trojans hit the road to take on Coastal Carolina

The Troy Trojans look to revitalize their postseason hopes with a win on Saturday afternoon against Coastal Carolina in Conway.

The Trojans (3-4, 1-2) postseason chances took a hit last week with a 52-33 loss to Georgia State. This week, the Trojans will attempt to pick up a critical win over Coastal Carolina, who currently sits in last place in the Sun Belt Conference Eastern Division at 0-3.

“We don’t control our own fate as much anymore,” said Troy head coach Chip Lindsey. “We’re still looking to getting on the field and getting ready for Coastal Carolina.”

The Trojans will look to clean up their run defense from last week. They allowed 390 rushing yards in their loss to the Panthers.

“They do a really good job of mixing up the formations and getting you out of position,” Lindsey said. “Their quarterback Bryce Carpenter is doing a nice job this year of executing their plan and they have a great running back as well, so it’s another challenge for us. We need to match their physical style and tackle them in space.”

The problem for the Trojans last Saturday was getting beat at the point of contact. That is one of the areas they look to clean up this Saturday.

“We need to get off our blocks and be a little more physical on the defensive end,” Lindsey said. “We need to make sure we stay in our gaps on defense. At the end of the day we just need to play better and do a better job of getting off the field on third downs.”

“You see them mix up their looks and play extremely hard,” Lindsey said. “Watching the Georgia Southern game they just played; they flew to the ball and did a great job. They’re big and athletic up front and present a lot of different looks.

The Trojans have returned three kickoffs for touchdowns in their only two previous meetings.

The Trojans won their two previous meetings with Coastal Carolina including last season 45-21.

The Pike Liberal Arts Patriots hopes to put a positive spin on their season when they take on the Lakeside... read more