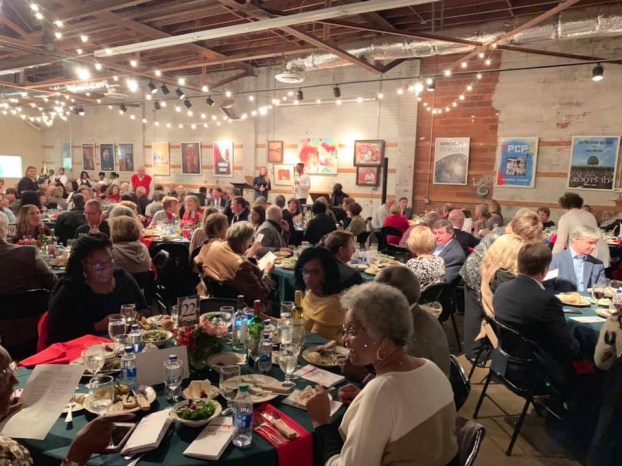 Community supports JCA at ‘Christmas at the Center’

And a good time was had by all!

That’s the way Jennifer Senn described Christmas at the Center Thursday night at The Studio in downtown Troy.

Christmas at the Center is an annual fundraiser for the Johnson Center for the Arts, a non-profit arts organization.

Senn, Christmas at the Center co-chair with Day Barnes, said the event was successful, not only as fund raiser for the Johnson Center, but also as a fun-raiser for all those in attendance.

“Christmas at the Center is the largest fundraiser for the Johnson Center for the Arts,” Senn said. “It’s also a wonderful way for JCA members and the community to come together and celebrate the season.”

Christmas at the Center opened with a reception at the JCA and an opportunity to bid on the 80 items donated by artists and businesses for the silent auction. Music was presented by Shelia Jackson and friends.

“The JCA was beautifully decorated for the Christmas season with five large Christmas trees decorated by students in schools throughout the country and sponsored by local businesses,” Senn said.

Following the reception, the doors of The Studio opened for the seated buffet dinner, entertainment and the live auction.

“The Studio was beautifully decorated by Alvin Sankey and the dinner by Sydney Catering of Luverne was wonderful,” Senn said. “Shelia and her friends entertained during dinner.”

Following dinner, the live auction was lively but friendly.

The artwork donated by local artists included stained glass pieces from Adams Glass including “The Joy of Nativity” and two football-related paintings, “The Iron Bowl” by Mike Benton and “Nick Saban” by Amanda Porter.

The competitive bidding in the live auction was an indication of the quality of the items on the block, Senn said.

“Items for bid included other artwork, parties of different kinds and tickets to events including the Shakespeare Festival.”

Christmas at the Center was a very successful event and Senn said he committee and the Johnson Center greatly appreciate the strong support from the community.

“Events like this are ways to grow and share the interest the arts and to support the JCA,” she said.

Wiley White, JCA exhibition coordinator, expressed appreciation for the dedication and hard work of the Christmas at the Center committee, the entertainers, the volunteers and all of those who came in support of the JCA.

“What was so encouraging was the diversity of the those who attended,” White said. “Christmas at the Center brought people of different ages and from all walks of life together in support of the arts. The Studio was packed; the food was great; the entertainment was amazing and the auctions were successful,” White said. “And, everybody was happy.”

Troy is at a slight risk of severe weather overnight that could produce isolated tornadoes, strong winds and hail. Pike... read more