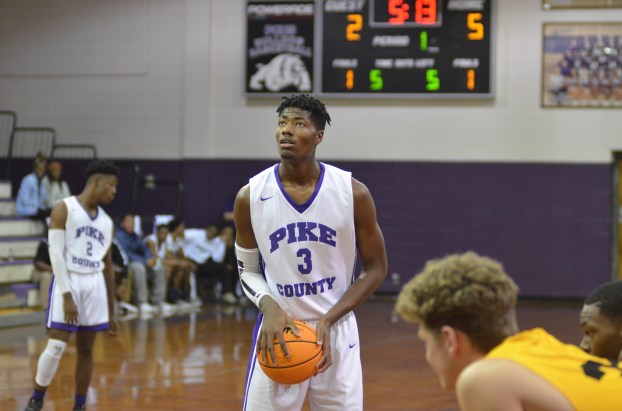 Burney leading the Bulldogs into the postseason

Pike County senior Andres Burney is closing out his career with the Bulldogs on a high note.

The big 6’8” senior is making the most out of his opportunity to not only improve personally, but he has the Bulldogs in a prime position to make a deep run in the 2020 state playoffs.

Burney and the Bulldogs just finished up area play with an undefeated record and will host the area tournament.

“We have been working hard,” Burney said. “As long as we stay in the gym, we are 17-5 right now. We have been better than we have in past seasons.”

Burney and the Bulldogs entered the season with added motivation. Burney believes that key players have played a difference this season.

“We have guys that are really motivated,” Burney said. “We have Amaghie Lampley and Omar (Cumberbatch), they really help us out. Our bench this year has really produced some big numbers for us. They are helping us out a lot.”

Burney has been one of the leaders on both sides of the court. He is averaging 24 points per game this season to go along with 15 rebounds, five assists and four steals.

“Before the season started, I was playing AAU ball,” Burney said. “That helped me a lot and helped me increase my game overall.”

Playing AAU ball in the summer helped Burney fine-tune his craft and skills that he has brought into this season.

“I was just doing ball handling drills and I was shooting the ball more,” Burney said. “I was learning how to protect the ball from defenders and I was working on improving my outside range.”

With his final regular season now behind him, Burney has totaled nearly 1,500 points at 1,486. He has a total of 1,200 rebounds and 250 blocked shots. Even though he is proud of his offense, it’s not what Burney is most proud of – and he acknowledges there is still plenty to work on.

“Just running the floor and getting rebounds,” Burney said. “I need to work on my strength and body building. I know it will help me in the long run. I know it’s all I need right now. I want to improve all the areas of my game, but strength is the main thing right now.”

During his career with the Bulldogs, Burney has been named most improved player, Top 10 Big Man of the South, All-Area in 3A, Dothan Eagles Super 12, All Tournament Team and Elite 100.

Despite all these accolades, Burney is not yet concerned about his future. Instead, he is focusing on this year’s team.

“I’m not really interested right now,” Burney said. “I am really just trying to get through the season and see what offers come to me.”

Currently Burney is focusing on the upcoming area tournament, which is set to begin on Tuesday.

“We are going to have to be well-disciplined and well-coached,” Burney said. “We need to hold the ball and not have any turnovers. Make shots and free throws.”

Even before there was music, feet were dancing. That was the scene in the gymnasium at Troy Elementary School on... read more