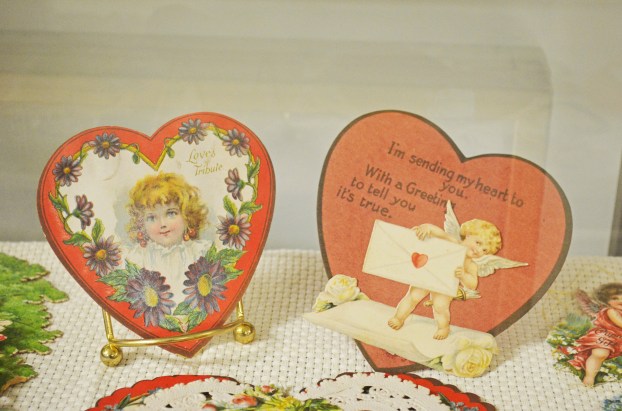 The Pioneer Museum of Alabama is well-know and appreciated for it extensive collection of pioneer artifacts. But, the museum’s display of antique Valentines will take center stage during the week of Valentine’s Day.

On Friday, Barbara Tatom, museum director, and Julia Scruggs, volunteer, took a few minutes to enjoy the museum’s collection of vintage Valentines and reflect on the history of Valentine’s Day, which is named after Saint Valentine, a Catholic priest who lived in Rome in the 3rd century.

The legend is that, at the time of Valentine’s life, many Romans were converting to Christianity, but the Emperor Claudius II was a pagan and created strict laws about what Christians were allowed to do. He believed Roman soldiers should be completely devoted to Rome so he passed a law that Roman soldiers could not marry.

But that was a law that many soldiers refused to obey. St. Valentine was willing to marry soldiers in secret and that was the beginning of his reputation as a believer in love and marriage. But, because of his “crimes against Claudius,” St. Valentine was put into prison. There, he cared for the jailor’s blind daughter and cured her blindness. Before he was executed for his crime, he wrote a letter to the young woman and signed it, “from your Valentine.”

St. Valentine was executed on February 14 in the year 270. That is why we celebrate Valentine’s Day on February 14. It’s all about love, and really has nothing to do with chocolate candy and red roses.

That story of St. Valentine is not one that most children know nor did they know that story when Tatom and Scruggs were children.

“Valentine’s Day was a day for parties at school,” Scruggs said. “We were given a list of all the children in our class and we brought a Valentine for each member of the class.”

“We each had a white paper bag with our name on it,” she said. “If someone else in the class had the same name, you had to put your last name on the bag, too. The Valentines were “delivered” in our Valentine bags for us to take home and read and enjoy,” she said. “Everybody received the same number of Valentines. We bought the Valentines at the dime store in books and cut them out.”

The wording was ‘Be Mine’ or ‘Hug Me’ and those same phrases were inscribed on candy hearts, too.

“We were very selective about which Valentine went to each of our classmates,” Tatom said.

And, Scruggs said it was fun to try to decide which Valentine came from which classmates.

Valentine’s Day was all about parties with cookies, potato chips, Kool-Aid and ‘Be Mine’ candy hearts.

The Valentines Tatom and Scruggs gave and received were most often cartoon-like and featured animals and cute kids doing fun things.

“My favorites were the Peanuts’ Valentines,” Tatom said. “I loved Charlie Brown, Linus, just all of the Peanuts.”

“Today, Valentines are very different from the vintage Valentines but no matter whether it’s a cherub or Snoopy or Spiderman, the message is still the same, “Be Mine!”

During the annual State of the State address on Tuesday night, Gov. Kay Ivey announced a plan to disperse $1... read more