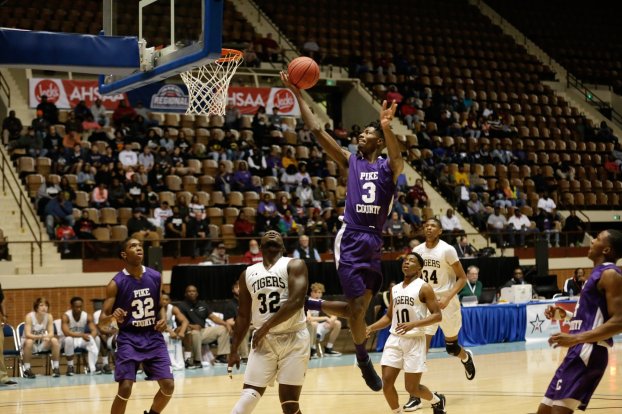 Bulldogs hope to handle their emotions against Hanceville in state semifinals

The Pike County Bulldogs headed to Birmingham a day early to get used to the sights and sounds of Birmingham. They take on Hanceville in the Class 3A semifinals on Tuesday.

After practicing at Hoover High School on Monday afternoon, head coach Doug Holland took the opportunity to introduce his players to Birmingham and Legacy Arena.

“We took in a game or two,” Holland said. “We practiced at Hoover High School and then I brought them to the arena to try and relax and get ready to play.”

It was day that brought on plenty of emotions. The Bulldogs have just one player on their roster that was present in 2016 and that was senior Andres Burney when he was just an eighth grader.

The atmosphere will be completely different than anything most of these players have experienced.

“I wanted them to come over and see the venue,” Holland said. “It’s totally different with all the fans. There are so many schools here at one time. There is nothing like being in Birmingham for the Final Four.”

Hanceville came into the postseason as the Class 3A Area 12 winner. They have knocked off Locust Fork, Piedmont and Midfield so far this postseason.

Burney has been the leader offensively all season long for the Bulldogs. Lately, the Bulldogs have had added contributions from Omar Cumberbatch and Jordan Hobdy.

“Omar has definitely stepped up,” Holland said. “Hobdy has played extremely well. We need a lot of help off the bench.”

Other than limiting turnovers and winning on the glass, the Bulldogs are looking to control their emotions.

“We have to play together as a team,” Holland said. “This is a different venue and it’s going to be the thing that shocks them. If we stay together we can win.”

Game time is set for 10:30 a.m. with the winner advancing to the state championship game on Friday afternoon.

The integration of public schools was a tumultuous time across the country, but the first students of an integrated Charles... read more