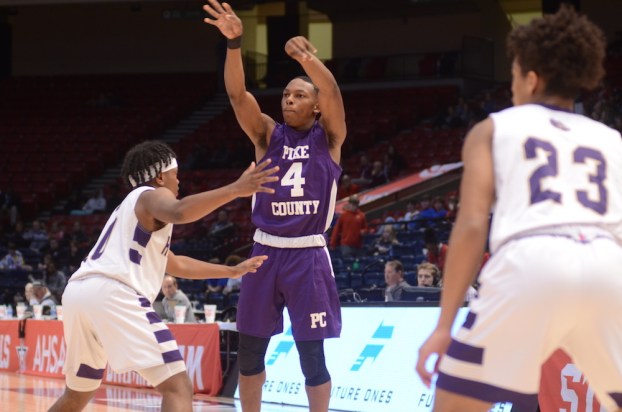 Bulldogs gear up for state championship

The Pike County Bulldogs take on Lauderdale County in their first ever state championship game on Friday afternoon in Birmingham.

The Bulldogs overcame a slow start against Hanceville, but rallied to knock off the Bulldogs 52-42. Pike County now has a shot to win their first title when they take on the Tigers beginning at 2:15 p.m.

After missing all but two minutes in the first half on Tuesday morning, Bulldog senior Andres Burney finished the contest with 12 points and 19 rebounds in just 16 minutes of play.

“We challenged him at halftime,” Holland said. “A lot of those fouls that he had, he got them. I told him to clam down and settle down. He has played like that since he has been here, so I didn’t expect anything different from him today. He came back and played strong in the second half.”

Burney is the only player on the roster who was in Birmingham the last time the Bulldogs made the semifinals in 2016. Handling emotions was a topic of conversation throughout practice leading up to the game. Because of that, Holland was surprised with the quick foul trouble from his leader.

“It kind of shocked me a little bit, but I told him to be a leader,” Holland said. “I thought he pushed it early. He challenged a shot and went over the back. I told him to calm down. I thought he was aggressive to start the game.”

The bulldogs hope to be at full strength for the entirety of the game when they take on a Tiger team coming off a 63-41 win over Hale County on Tuesday. Juvonne Shanes led the way for the Tigers with 16 points. All five of the Tiger starters finished in double figures.

The Tigers entered the tournament as the Area 16 winner. After knocking off Colbert Heights in the sub-regionals, the Tigers picked up wins over Winfield and New Hope before defeating Hale County earlier this week. Each of the Tigers’ postseason wins has been by double digits.

A new era began at Pike Liberal Arts School on Thursday morning when the school announced Mario White as the... read more