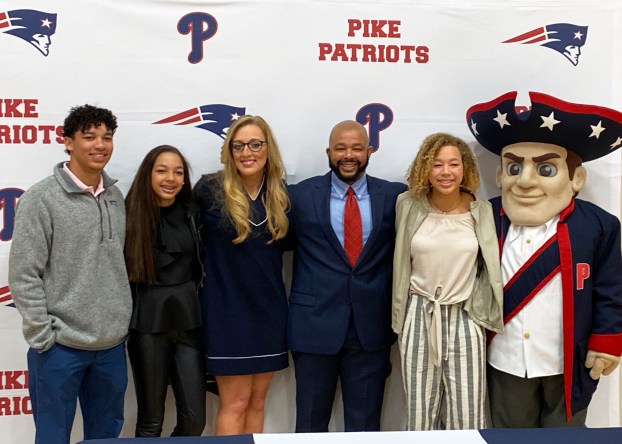 White was introduced to the Patriot faithful during a pep rally to honor the Patriot varsity basketball teams.

Headmaster Eric Burkett surprised the student body with the announcement of the hire. White walked through a banner and greeted the excited crowd.

“I am thankful for the opportunities that god has given me to coach and mentor kids of all ages to not only become better athletes but to also become better students and even better young adults,” White said.

White comes to Pike Liberal Arts after spending time at the University of Alabama under head coach Nick Saban. White spent time as a special assistant under Saban and worked with former Strength and Conditioning coach Scott Cochran.

“I truly think God has a plan for me,” White said. “I never thought I would leave the University of Alabama. Mr. Burkett gave me a call and I came to talk with him. I truly feel like God brought my wife and me here. We are happy to be a part of this community. We believe our new mission now is in Troy and we cannot wait to pour into the children and the people of Troy.”

This is not White’s first stop in the Alabama Independent School Association (AISA). Before coaching at Alabama, he spent time at Tuscaloosa Academy as a football assistant at the varsity level and he was also the junior varsity head football coach. During his time with the Knights, White liked what he saw at Pike Liberal Arts.

“I have always had great admiration for Pike Lib.,” White said. “We competed against them for five years. If you would have told me a year ago that I would be coaching at Pike, I would have told you, you were crazy. God’s plan is a lot bigger than our plan. I live my life through his steps and his words.”

White believes working with and around Saban and Cochran has played a big role in his life.

“Coach Saban and coach Cochran has been really instrumental in my life,” White said. “Those guys brought me in and put me to work with the guys you see on ESPN. I was awe struck when I first got the opportunity, but they are just kids as well. Saban sat me down and told me to keep God first and everything will work out. Coach Cochran is in transition as well, so it has been great bouncing things off one another.”

The Patriots immediately began the search for the new Athletic Director and head football coach in November. The hire came after an extensive search for someone that was not only a good coach, but also an esteemed man of character.

“During the interview process, it became apparent that Coach White is a man of faith and high integrity,” PLAS Chairman of the Board of Trustees John Henderson said. “He sets a standard of respect and excellence both on and off the field and he has an obvious gift for motivating young people. I am confident that Coach White will be a leader that will inspire our student athletes.”

As the football coach, White will be taking over a team that finished last season 3-8. White is looking forward to getting to work to create a new standard of excellence.

“We are going to work hard and work honest on and off the field,” White said. “I am excited to play a leadership role in elevating the standard of excellence from classroom to competition. People will know when they come up that hill that this is Pike.”

Welcome back: Trojans run away from Center Point in Class 5A semifinals

BIRMINGHAM – The Lady Trojans of Charles Henderson High used the same approach in the first round of the AHSAA... read more