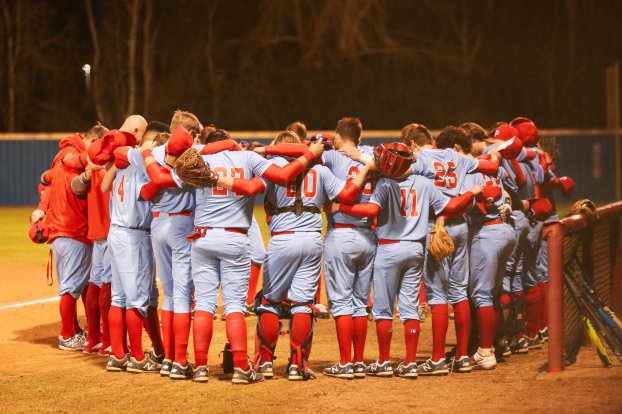 Above: The Pike Liberal Arts Patriots come together for a quick prayer in a game earlier this season. On Friday it was announced that both AHSAA and AISA athletics will be suspended due to the threat of the COVID-19 coronavirus.

Local athletics shutting down due to virus

Gov. Kay Ivey held a press conference on Friday afternoon to declare a state of emergency due to the threat of the COVID-19 coronavirus. During her press conference, Gov. Ivey announced the closing of public schools at end of business Wednesday.

Following the announcement, the AHSAA declared the last day for any activitity will be Tuesday, via a memo that went out to state superintendents, principals, athletic directors and had coaches of spring sports.

“All athletic events including, but not limited to, contests, practices, weight lifting and conditioning are hereby suspended during this time. The last date for any athletic activity will be Tuesday, March 17. The AHSAA will continue to work with the Alabama State Department of Education (ALSDE), Alabama Department of Public Health (ADPH), Center of Disease Control (CDC) and the AHSAA Medical Advisory Board to analyze the status of the current health situation.”

Following the 2.5 week school closure, the AHSAA will reevaluate the health conditions and determine if spring sports can resume.

“At the end of the 2.5 week school closure period, the AHSAA will reevaluate health conditions and determine the status of spring sports championship play. In the meantime, we pray everyone remains safe during this challenging time.”

“We’re currently cancelling all sports and events until further notice (after Friday’s games),” Thomas said. “Beyond that, we will work to continuously keep parents and guardians informed.”

The Trojans took on Rehobeth in a doubleheader at Hogan’s Hole on Friday night.

As of Friday afternoon, Pike County Schools Superintendent Dr. Mark Bazell said he was going to “take the lead from the AHSAA.” Goshen Athletic Director Bart Snyder said games will go on as scheduled leading up to Tuesday night.

The AISA also announced that effective Sunday, all sponsored academic and athletic activities will be suspended through April 5.

The Pike Liberal Arts Patriots are currently participating in a tournament at Macon East Academy.

Along with not holding classes on the Troy University campus, Trojan athletics has also been suspended indefinitely. The Sun Belt... read more