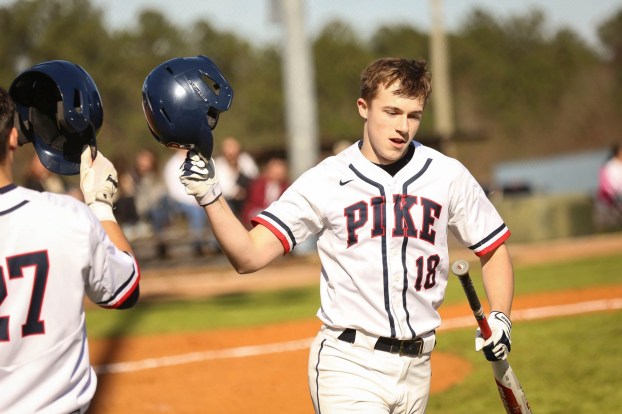 Local seniors hoping for another chance to play

The indefinite suspension of all high school athletics has had a large impact on all student athletes throughout the state of Alabama. Perhaps no one has been affected more than the senior student athletes, who quite possibly may have seen their final action.

Baseball, softball, soccer, track and field, golf and tennis have all been affected due to the threat of the COVID-19 Coronavirus.

“It’s really hard not having another year,” said Goshen senior softball player Alexis McLendon. “We are not able to have the full experience of a senior year, not knowing if we are going to be able to have a senior night.”

The Pike Liberal Arts Lady Patriots were in the middle of a softball tournament at Macon East when they heard the news.

“I think for us, it’s a surreal experience because when all of us found out, we were in the middle of a tournament and that  morning we showed up ready and not knowing anything,” senior Aubreigh Maulden said. “After the first game we hear it could be our last game and for us seniors, our last time ever playing in a Pike uniform. It’s just very emotional knowing that we may not be able to step back on the field with our best friends and represent Pike.”

The Eagles were hoping to play one final game earlier this week before the suspensions began. They were planning on having an impromptu senior night, but the game was ultimately canceled.

“It’s hard because this is the main sport that I like playing,” McLendon said. “I have waited all year for this and it’s disappointing that all this is going on. It’s tough.”

Pike Liberal Arts senior baseball player Davis Allen and the rest of the Patriots are hopeful that even though they’re not playing now, they will be able to finish things at a later date.

“It’s very sad, but we’re still clinging on to hope that we’ll be playing in a couple weeks,” Allen said.

Allen, like many senior athletes, entered this season with hopes of playing collegiately. Allen and many seniors were going to use their senior season to fine tune their craft before making the transition to the next level.

“This definitely hampers it a little bit,” Allen said. “I just have to continue to hit the weight room and get in the cages.”

Although Maulden has already signed a collegiate scholarship, she believes a lost season will hamper her efforts to get ready for college.

“It’s challenging,” Maulden said. “I’m going to have to work that much harder next year. Kind of scary knowing that if we don’t play anymore, I won’t have game experience until I get down there.”

The Eagles met as a team on Sunday one final time. Although it was a difficult conversation, McLendon thought her team left on good terms.

“I think we ended things on a good note even though it was our last time talking,” McLendon said. “We were all aware of the situation and what could possibly happen. We used it as an opportunity to have fun and end the season on a good note.”

Even though teams are not able to get together and practice, both Maulden and Allen plan to stay sharp in the event that they get to finish their senior seasons.

“I am getting out in the yard and practicing my hitting off a tee,” Maulden said.

With the 2019-2020 basketball season finished the Alabama Sports Writers Association announced their All-State team over the weekend. On the... read more