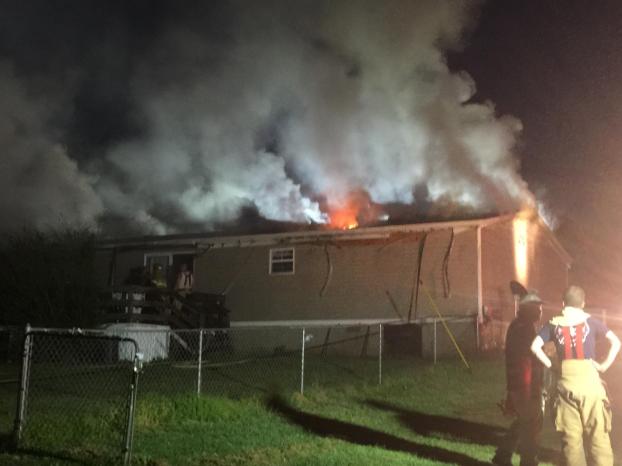 Robin Powell stood with her dad and husband and watched as flames consumed her mom and dad’s house on Burnt Out Bridge Road Thursday afternoon.

“All we could do was stand there and watch,” Powell said. “We were helpless. It was surreal.”

Around 5 p.m. Thursday, Robin’s dad and mom, Kenny and Barbara Motes, were at her house just up the hill from their own on Burnt Out Road, off Smart Road in Troy.

“My dad went home for a few minutes and discovered the fire,” Robin said. “My brother was in the house but, thankfully, he got out. The animals got out somehow so we were blessed in that. But the house is a total loss. Everything my parents own is gone.”

Neighbors gathered in support of the Motes family.

“My mother became very upset so a neighbor took her to her house, but my dad just stood and watched,” Robin said.  “It was heart-wrenching.”

Robin said her parents’ home was also a second home for her 11-year-old daughter.

“She says with my parents while I work,” Robin said. “She has toys and clothes there. It was a second home for my brother’s grandchildren.  This is hard for them, too. Daddy did good until today when he went down and saw the damage in the daylight. This is very hard for my parents. They are still somewhat in shock.”

Robin said the cause of the fire has not been determined but it is thought the fire started in the laundry room area.

Robin said the family is grateful for the response of the fire departments.

“The fire fighters worked so hard to put the fire out and keep it out,” she said. “They would get it out but it would keep coming back. At one point when the fire was out, several of the firefighters went in one of the bedrooms and threw out some pictures. We were so thankful for that.”

Robin said, it took more than three hours to put the fire out completely.

“Hopefully, there is something that we can save,” she said. “There’s one antique bed we may be able to save. We are hoping to find some of the sentimental things but we won’t know until we can go through everything.

Robin expressed appreciation to the fire fighters from Troy, Hamilton Crossroads, Henderson, Goshen, Springhill, Meeksville and Brundidge and Haynes Ambulance for their diligence in bringing the fire under control and out.

“They all worked so hard,” she said. “I was afraid for them.  We can’t thank them enough.”