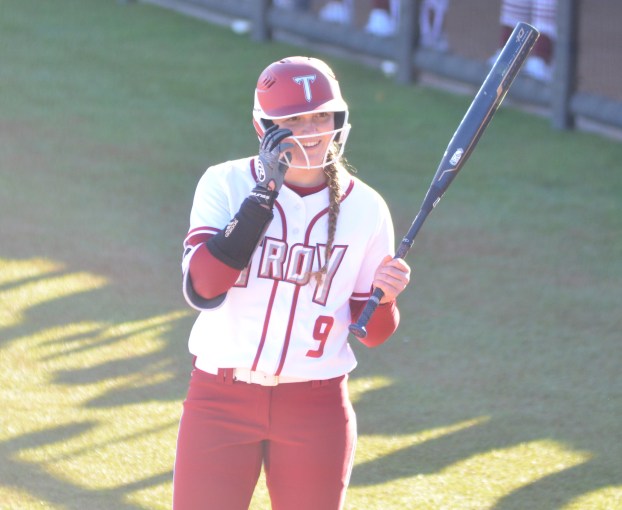 Messenger Photo/Mike Hensley Freshman Jade Sinness steps into the batter’s box for the Troy Trojans in their season opener against Lipscomb.

The Troy softball team had one of their better starts in program history in 2020. Their starting pitcher was one of the best in the entire nation. After just beginning Sun Belt Conference play, the season came to a crashing halt.

Following the outbreak of the COVID-19 coronavirus, the NCAA and the Sun Belt Conference suspended all spring sports.

“I think it’s a lot of processing and a lot of unknowns,” head coach Beth Mullins said. “We found out we weren’t’ gong to be playing softball for quite some time. It seems like it’s been forever. It happened really quickly.”

The Trojans entered the break 17-6 on the season. They were coming off a 1-0 win over in-state rival Samford.

“We played Samford and when we got off the bus to play the game, nothing was going on,” Mullins said. “At 4:30 when we got back on the bus to head back to Troy, all sorts of things were happening.”

Sophomore starting pitcher Leanna Johnson pitched a complete game shutout in Troy’s win over Samford. It was her seventh shutout this season, tied for most in the country. She went into the break with 137 strikeouts, sixth most in the country. Offensively, Kelly Horne and Katie Webb led the Trojans with a .368 batting average. Katie Lively (.364) and Jade Sinness (.300) all hit at or above the .300 mark.

With the season now over, the Troy players are finding ways to adjust to the time off.

“I think our kids are finding a lot of new hobbies to do,” Mullins said. “I’m hearing how much prospective they have right now and how much they appreciate and miss something they took for granted. When something gets taken away from you, I think you realize how much you loved it.”

Now, the Trojans plan on transferring over their success on the field to academics.

“Our kids are extremely motivated academically anyway,” Mullins said. “We’ve won the academic award in the Sun Belt Three or four times in a row. Every couple of days we remind them that this is different. I honestly think they’re going to be ok.  Every week we are going to get on a video conference and remind them to stay on top of it. That is the priority.”

Shortly after announcing the cancellation of the season, the NCAA announced they were looking into giving each student-athlete an extra year of eligibility.

“I think that was huge,” Mullins said. “They did it so quickly too. I think it’s important to give people the option. I think what some people forget is there are going to be a lot of kids that have plans and jobs. Rightfully so, they are going to move on. I hate it for them because that’s a tough way to end your career. For those that would come back, I think that’s awesome.”

From safety equipment to supplies for honey-do lists, the coronavirus spread has prompted an uptick in business for local hardware... read more