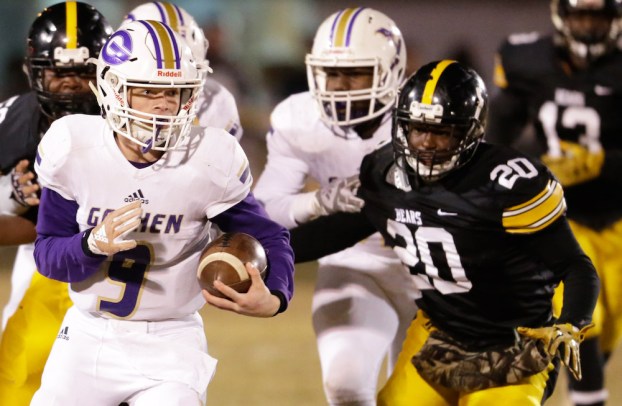 Goshen senior quarterback Bryan Galloway made his first start with Eagles as a ninth grader, now following his senior season, he will represent his school at the Alabama High School Athletic Association’s 61st All-Star Classic in July.

The Alabama High School Directors & Coaches Association released the team rosters on Thursday. Galloway will be joined by teammate Dustin McFarland, who also made the team, on the  the trip to Montgomery’s Crampton Bowl on July 15. Two teams will be made up of 37 players who are set to graduate in 2020.

“I’m really excited,” Galloway said. “I’m really happy because I never thought I would get an opportunity to be able to do that. I’m happy for the opportunity to play another high school game. It’s going to be fun.”

Galloway will play under McGill-Toolen head coach Earnest Hill. The South squad holds an advantage over the North, leading the series 22-19. The South team won last year 22-19 to snap a four-game winning streak for the North.

The Goshen Eagles found more success in 2019. They made a return trip to the postseason and finished the season with an 8-4 record. Galloway was a big reason why the Eagles found themselves back in the postseason. In his junior season, Galloway completed 92 of his 143 attempts this season. He threw for 1,386 passing yards with 18 touchdowns. He finished with a passer rating of 121.4.

Galloway also picked up yards on the ground. As a mobile quarterback, Galloway ran for 1,494 yards on 180 carries. He averaged 8.3 yards per carry and finished with 21 rushing touchdowns.

“I think it was probably one of my best years,” Galloway said. “As a team, we did really good.”

Despite putting up some big passing numbers, Galloway really loves running the ball.

“I like doing both a lot,” Galloway said. “I have been a called a triple-threat, but I like to run and throw the ball.”

Galloway after starting as a freshman continued to grow into a strong starting quarterback all way through his senior season.

“I was able to start my first varsity game in the night grade,” Galloway said. “I realized it was going to be a fun journey and it was something that I really wanted to do. I enjoy playing football and hopefully I get to play at the next level one day.”

From day one, Galloway has been under the tutelage of coach Dee Brundidge.

“He has been with me since I moved here,” Galloway said. “I grew playing in little league and he is one of the best coaches that I have had. Growing up with him, he pushed me to be the best that I can be. He wants me to succeed at the next level.”

In July’s all-star game, Galloway will be going up against the state’s best outgoing seniors. It will be a challenge that Galloway is ready to encounter.

Galloway is going to take the next few months to keep up his conditioning as he prepares for the game.

“I am going to be conditioning and getting ready,” Galloway said. “Going to work out. It’s what I usually do.”

Brundidge moving ahead during difficult days

Somewhere amid the downtown Brundidge Main Street traffic and the changing of gears on the big-rigs, there is the distant... read more