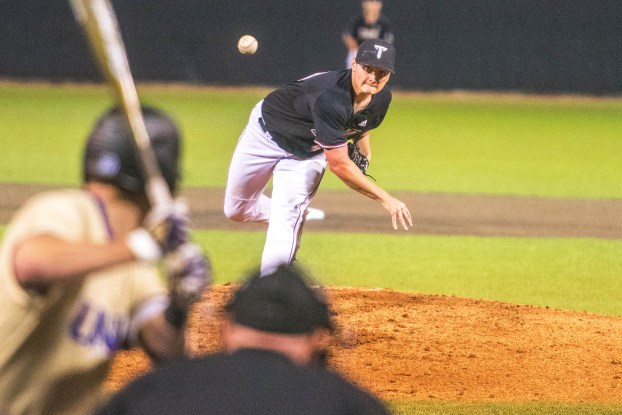 File photo | The Messenger Troy pitcher Levi Thomas delivers a pitch for the Troy Trojans. Thomas led the way as Troy’s No. 1 starter in 2020. He finished the season with a .39 ERA with 42 strikeouts in 23 innings pitched.

Levi Thomas was not only the talk of the town or the conference this season; he was also starting to garner national attention.

The Trojans were on their way to Statesboro to take on Georgia Southern in the Sun Belt Conference opener when they got the call to turn the bus around and that their game had been canceled.

In his last appearance on the mound, Thomas pitched six innings, allowed just one run, while striking out 11 batters in a 1-0 loss to Michigan State.

As a sophomore, Thomas finished the 2019 season 8-2 with a 4.24 ERA. This season Thomas had the 14th lowest ERA in the country during the shortened 2020 season. His 42 strikeouts was good enough for a tied for 10th most in the nation. Opponents hit just 1.17 off the junior pitcher. When asked what has helped him this season, Thomas credits his team’s offensive abilities for his success.

“Mainly I would attribute it to seeing our offense and how it can hit starting in the fall all the way through the spring,” Thomas said. “Knowing that you have an offense that is capable of being a threat one through nine gives every pitcher the confidence and the belief to attack the hitter. Knowing that if you give up a run or two it doesn’t matter because the offense is capable of putting one or two on the board.”

Thomas was ranked 48th in the D1 Baseball’s list of the game’s top 100 pitchers.

Thomas, along with junior Orlando Ortiz, gave the Trojans two solid arms at the front end of the rotation.

“What I was most excited about as we were beginning our conference season was I really believed the front of our rotation was as good as anyone in the conference,” head coach Mark Smartt said. “Both Levi and Orlando established themselves in terms of their role. Levi had been a dominant starter in the one slot on Friday night.

“Levi goes 2-1 in four starts and let up just one run. We didn’t help him that much in two games. We knew what he was going to give us on Friday night and that’s a chance.”

The Major League Baseball Draft is set to begin on June 10. Thomas’ name has come up as a possible draft prospect. He was recently named a top 400-draft prospect by Perfect game. During his time off the field, he continues to work hard and prepare for the next time he is able to compete.

Troy infielder Drew Frederic already felt like the veteran when he stepped on the field as a fifth year senior.... read more