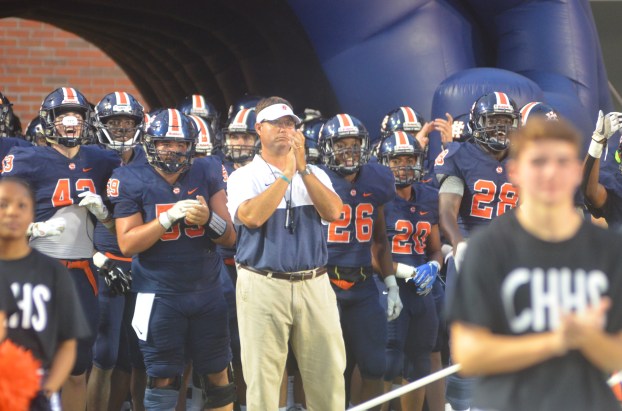 Photo/Mike Hensley | The Messenger Charles Henderson head coach Brad McCoy gets ready to lead the Trojans on to the field last season.

The Charles Henderson Trojans are heading into week five of off-season workouts. After the coronavirus shut down all athletics in March, football players returned to campus to begin offseason workouts on June 1.

“They were out of shape,” head coach Brad McCoy said. “They weren’t very mobile for about 11 weeks whenever the quarantined started. We are in our fifth week and I think the soreness is starting to wear off. They have been getting into running shape in the last few weeks.”

While the team is eager to start organized football activities sometime this summer, the emphasis has been put on running and working in the weight room.

The Trojans have spent the first four weeks working in six groups. Each coach works with no more than 12 players at a time. The Trojans have different times throughout the day for the players to come in and get some work done. This week the Trojans hope to get everybody back at one time, however they will still split the players into smaller groups.

“We created about six groups of 10 to 12 kids,” McCoy said. “For the last four weeks we have had three different sessions. Two groups would come in at a time to lift and run for 90 minutes of work. That gives us about a 30-minute buffer to get everything cleaned. We have to sanitize the weight room and clean all the weights before the next group comes in.”

Despite all the restrictions, the players were more than eager to return to a sense of normalcy and get ready for the upcoming football season.

“They guys were ready to get back into a routine,” McCoy said. “I think the face coverings have been the biggest obstacle, along with getting used to the other guidelines.”

The Trojans, along with all the other teams in the state are at the mercy of the state health department. Before finalizing any plans this summer, McCoy will wait for the newest guidelines from the Governor Kay Ivey and State Superintendent Eric Mackey.

“We haven’t had a new update on any restrictions being lifted ever since the first ones came out about June 1,” McCoy said. “We are not going to change anything until we get the latest update from the state department.”

“I have felt that we would have football, but I also felt it wouldn’t be the same as what we are used to,” McCoy said. “Is the player box going to get extended from the 10 yard line to the other 10? Are there going to be fewer fans allowed in the stadium? I don’t know. Everyone is still unsure about what the guidelines are going to be.”

“We are possibly moving two football games to Thursday night because Troy has Saturday games the same week. They have to have a 24 hour period to clean their locker rooms,” McCoy said. “That is one change that could come down the road. It’s not done yet, but talking with Brent Jones, we might have to do that.”

With Troy playing at home the same week, the two games that may be moved to Thursday would be Charles Henderson’s game against Greenville on September 4 as well as their game against Andalusia on September 18.

Traffic along 6th Avenue in Brundidge is a little heavier these days and also much slower, actually vehicles are creeping... read more