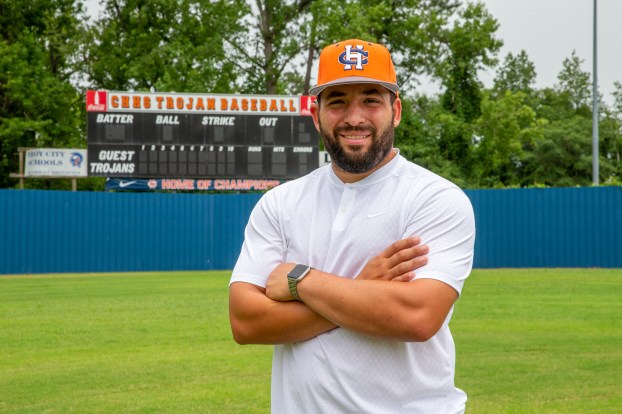 Smartt was destined to play baseball

From the day he was born and named after the most famous and successful coach in Troy University history, Chase Smartt was destined to be a baseball player, and ultimately a coach.

Recently named the head baseball coach of Charles Henderson High, Chase is the fourth in a family of the same number to earn the title of coach. His dad Mark Smartt is the head coach of Troy University baseball, his mother Debbie has been a PE teacher and volleyball coach in the Troy City School system for many years, and his sister Taylor is a former player and current assistant coach for Troy University softball.

“When I hear someone say, ‘Hey Coach Smartt,’ I want to say, ‘That’s not me, that’s my dad,’” said Chase. “But now I’m trying to get used to hearing ‘Coach Smartt.’ I am happy to be Coach Smartt the Fourth.

“I am blessed to keep the name going. I want to start my coaching career here in Troy. My dad started as a GA (graduate assistant) here playing for Coach Chase Riddle and then Taylor volunteered right after she got through playing.”

Coach Mark Smartt played on two national championship teams for the legendary Riddle in the 1980’s, and when a son was born to Mark and Debbie, there was never a doubt as to what his name would be.

“I was named after Coach Riddle,” said Chase. “It was amazing how he changed so many peoples’ lives. You can tell how great a coach he was because of how many children are named after him. A lot of players, about nine or ten, named their children after him. It is a great tribute. I’m trying to make sure that I live up to the name of Chase Riddle.”

Coach Chase Smartt also had the good fortune of meeting and talking with Coach Riddle when Chase was a young man.

“I always loved to talk with Coach Riddle,” said Chase. “When I was a boy, he always had the best stories, not just about baseball and the game, but about life. He had done so much that everyone knew how good Chase Riddle was, not only as a coach, but as a player. Whatever Coach Riddle did, he always enjoyed it. He always was happy.”

Chase has had the luxury of learning from his father, his mom and his sister, who all entered the ranks of coaching before him, and prepared him for his new job today.

“My mom was the biggest supporter no matter what. Not just in taking me to games but always taking me to Birmingham to the doctor every month (for the Cochlear hearing implant he wears). She was the biggest supporter for all of us. She understands how much we care about the game, but would be the one to say, ’It’s okay, we’ll get them next day.’ My dad would teach us how to correct our mistakes, and my mom on the side making sure we want to still love the game.”

Chase’s sister, Taylor, was also a valuable influence in his life.

“She was very competitive, and we were a very competitive family,” said Chase. “We grew up together and when I was younger I always wanted to beat her in everything. When she was 16 and I was 12, I wanted to get to where she was at. I learned how to be competitive because she was not trying to let me win. She wanted to make sure I understood that I knew how to win, no matter the age. She helped me so much, even today. She has helped me to grow up. I have had a great family of support with the four of us together.”

Chase also has a common bond with the new head coach at Pike Liberal Arts, Rush Hixon, who was named as the leader of baseball at Pike the same week as Smartt.

“Our goal is now for Rush and I to still have that baseball-city feeling every time we play a game,” said Coach Smartt. “Rush and I have built a close relationship growing up together. He went to Pike and I came here but we still played together, competed together and hung out together. That’s what we did in college, (as teammates at Troy) and we hung out a lot.

“When he was at Central Alabama and committed to Troy, I was happy because I knew he was a heck of an athlete, meaning he competed every time he pitched. He always had that competitiveness to throw his fastball and his slider and we needed that guy. He was a guy that got the ball on the mound and he was going to get you out some way, somehow.”

The roster may not be as deep in talent at CHHS as when Chase and his teammates won back-to-back state championships in 2014 and 2015, but Coach Smartt believes things will improve. He also wants his players to understand the history, tradition, and what it means to wear the uniform of CHHS.

“It started with Coach (Mike) Hogan and (Butch) Austin and Steve Garrett and then Coach (Derek) Irons,” said Coach Smartt.

“Everyone understands wearing orange and blue means having a good program and good games each season. Today I want everyone to know we still care about that day to day. If you are going to wear Charles Henderson on your shirt, you are going to wear it right – tuck it in and wear it right. That’s who you are when you wear that shirt. It does not matter about the name on the back, it is the name on the front that matters. That’s what I want them to understand.

“Troy has always been a baseball town. It started with rec ball back in the days. It was so big, and everybody knew Troy was a baseball city. We had the talent as we grew up. Pike Liberal and Charles Henderson had so much talent. The chemistry was at the same schools, because we knew we could win. That started in rec ball. That’s when everybody knew we were a baseball city.”

Since Coach Irons left in 2015 for a job at a bigger school at Oak Mountain, CHHS baseball has seen a number of coaches in the third-base coaching box. Coach Smartt hopes to be the only coach in that box for years to come.

“My goal is to stay here long term,” said Coach Smartt. “The city of Troy is a great place. I am honored to play and now coach here. My goal is not to leave, because I want to turn this back to what Coach Irons did before he left. He left at the right time, because we were on the top. He made sure everything was checked off before he left. He won back-to-back state championships and left when he was on top. He left to go to a bigger school.  Each year he is always checking off the good things, and that is my goal, to make sure before I leave is to have the program back to where it was when I played here.”

When you mention the name Hixon in Troy and Pike County, you immediately think of two things — farming and... read more