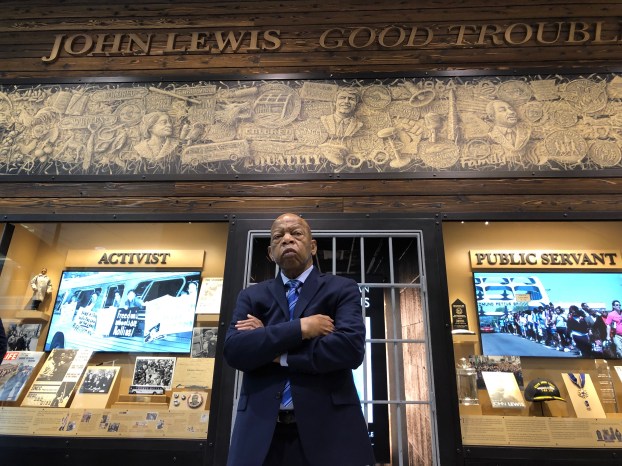 “John Lewis: Good Trouble,” a documentary about Lewis, a Pike County native, who was a leader in the Civil Rights Movement of the 1960s,  opens today at the  Continental Cinema 5 in Troy and theaters all across the country.

Local show times will be 2:40 and 7:40 p.m. Friday through Monday and Thursday of next week.

The documentary may also be viewed on demand at appleTV, You Tube, Amazon Prime, Direct TV, Redbox, at&t and others.

The documentary from Dawn Porter revisits Lewis’ most famous work as an activist and also chronicles the life of the longtime congressman from Georgia.

“John Lewis literally changed the world by his involvement and actions in the Civil Rights Movement,” Key said. “It is a movie that should be of additional interest to people in Pike County because his family lives in the Garden Bassett Road area.”

The movie highlights Lewis as he recalls being immersed in the philosophy of nonviolence and him speaking at the March on Washington. He also shares memories of the Selma to Montgomery March.

Lewis is the U.S. Representative for Georgia’s 5th congressional district. He has served since 1987. He is the dean of the Georgia congressional delegation.

Lewis, who as chairman of the Student Nonviolent Coordinating Committee, was one of the “Big Six” leaders of groups who organized the 1963 March on Washington. He played key roles in the Civil Rights Movement and its actions to end legalized racial segregation in the United States.

Lewis has been awarded many honorary degrees and is the recipient of numerous awards from eminent national and international institutions, including the highest civilian honor of the United States, the Presidential Medal of Freedom.

Lewis was honored by the Troy Reunion Alabama Bicentennial Committee and has been a featured speaker the annual Leadership Conference hosted by the City of Troy and Troy University.

“I am so honored and deeply moved,” Lewis said at the time. “I saw the (John Lewis Day banner) when I drove up and started crying and I’ve been crying ever since.”

He urged the crowd at the event to continue to fight for their beliefs.

Shelia Jackson, City of Troy tourism director, said although Lewis has roots in small town America, he has made a positive impact around the world.