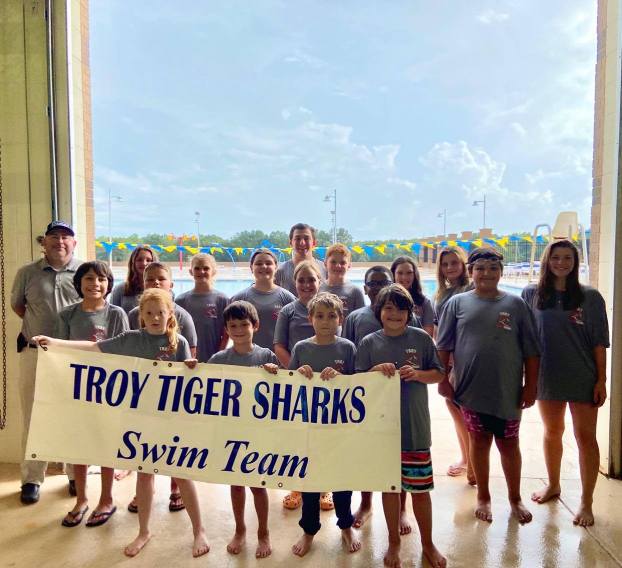 Submitted photo | The Messenger The Troy Tiger Sharks finished their summer last week with a party at the Troy Recreation Center.

Even with no meets, Tiger Sharks have fun summer in the pool

The Troy Tiger Sharks were the only team for the City of Troy to practice this summer. They did so with no competitions and no meets. Despite not having a normal summer season, the Tiger Sharks had a fun and productive season.

“I think we had a fun summer of training,” said coach Nicklaus Chrysson. “A lot of kids came in who were new this year. Although they didn’t get to experience a swim meet or a competition, they certainly left the pool deck at the summer better than they were when the summer began.”

The Tiger Sharks had 28 swimmers this summer. Without competing in swim meets this summer. The summers spent time stretching before hitting the pool. While at practice, all the swimmers and coaches did their best to social distance themselves from one another. At the end of each practice all equipment was cleaned and wiped down, making sure everything was clean.

The hope was at the beginning of the summer was that there was going to be swim meet at the Troy Recreation Center pool that featured only Tiger Shark swimmers. With so much going on this summer, the Tiger Sharks opted to just spend the summer practicing.

“We debated that and we were going to, but decided not to,” Chrysson said. “With the kids going to the beach or vacation, not everyone could make it.”

The Tiger Sharks did have an end of the year swim party last week.

Despite not being able to compete, the Tiger Sharks had a positive attitude all summer.

“I really think their attitudes stayed the same if not greater throughout the summer because there really isn’t anything else to do this summer,” Chrysson said. “We were the only sport going on and we were really their only activity during the day throughout the summer. I think a lot of them were sad that we ended when we did.”

With plenty of new swimmers, Chrysson hopes that the swimmers, who enjoyed the summer, will be back in the pool next year.

“I hope some of the new kids left liking swim and have a better understanding,” Chrysson said. “Hopefully it will be a draw for them next summer when hopefully we are able to compete.”

The American Legion Post 70 17U team will wrap up their season this weekend in the Terry Jinright Tournament at... read more