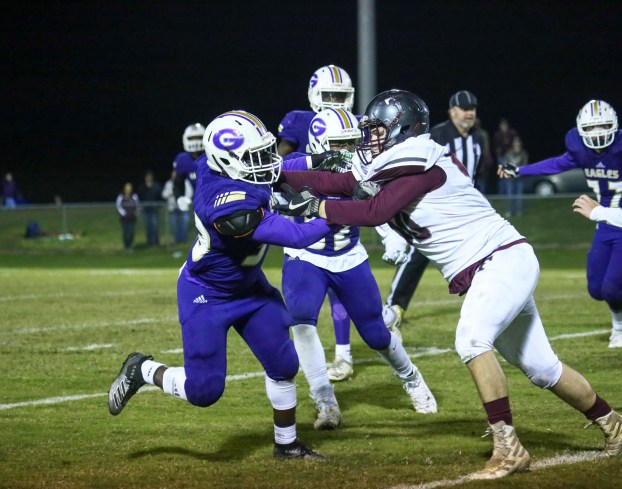 photo/Jessica gunn | The Messenger A Goshen defender tries to get around a block of a Thorsby player during last season’s postseason..

Eagles get back to work in first official week of practice

The Alabama High School Athletic Association released a new set of rules and guidelines last Thursday afternoon, a day after they announced the fall sports season will start on time.

On Monday, public schools were able to hit the field for their first day of practice.

The Goshen Eagles finished last season in the playoffs after finishing the regular season 7-3. This season the Eagles welcome a younger group of players who were excited to be back at practice beginning on Tuesday.

“We could have started Monday, but we wanted to keep our schedule,” head coach Bart Snyder said. “We had a really good turnout and a good workout. There was a lot of excitement.”

For the first week, teams will go through an acclimation period where they are allowed to wear helmets, but no pads. The fact that the Eagles are back on the field brings a sense of normalcy back to Goshen High School.

“The kids see that it’s here,” Snyder said. “They feel more confident that it’s (the season) about to happen. You turn on a TV and they are telling you ‘We can’t do it.’ Seeing it in action at your place is different when you see it somewhere else.”

The Eagles are replacing key seniors off last year’s roster including their starting quarter Bryan Galloway. Despite the losses, Snyder believes the future is bright in Goshen.

“We have people that are coming and that’s exciting,” Snyder said. “We are proud of that. The excitement is coming and we are excited about what we are doing here.”

Coach Snyder has long said that his team is going to do what Goshen always does. Even in the midst of a pandemic when the next practice is never guaranteed, Snyder is sticking to his mantra.

The Eagles have less than a month to get ready for their season opener. They will open up at Home against Holtville.

‘I AM’ organization seeks to boost young girls’ esteem

Veatrice Ware-Thomas of Brundidge is the visionary of I AM: I Am Original. I Am ME, a non-profit organization that... read more