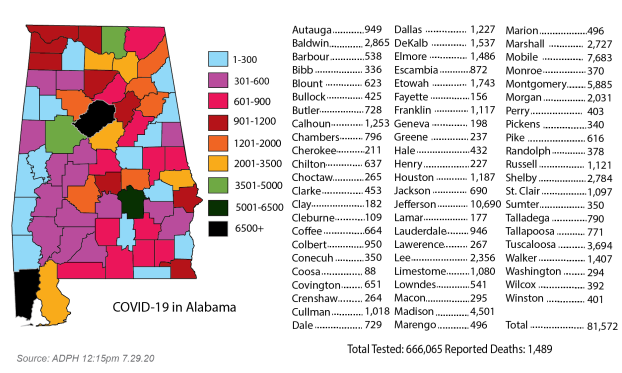 More than 1,595 people were hospitalized, with more than 32,500 presume recovered.

As the world races to find a vaccine and a treatment for COVID-19, there is seemingly no antidote in sight for the burgeoning outbreak of coronavirus conspiracy theories, hoaxes, anti-mask myths and sham cures.

The phenomenon, unfolding largely on social media, escalated this week when President Donald Trump retweeted a false video about an anti-malaria drug being a cure for the virus and it was revealed that Russian intelligence is spreading disinformation about the crisis through English-language websites.

Experts worry the torrent of bad information is dangerously undermining efforts to slow the virus, whose death toll in the U.S. hit 150,000 Wednesday, by far the highest in the world, according to the tally kept by Johns Hopkins University. Over a half-million people have died in the rest of the world.

Hard-hit Florida reported 216 deaths, breaking the single-day record it set a day earlier. And South Carolina’s death toll passed 1,500 this week, more than doubling over the past month. In Georgia, hospitalizations have more than doubled since July 1, with 3,188 people hospitalized Wednesday.

“It is a real challenge in terms of trying to get the message to the public about what they can really do to protect themselves and what the facts are behind the problem, said Michael Osterholm, head of the University of Minnesota’s Center for Infectious Disease Research and Policy.

He said the fear is that “people are putting themselves in harm’s way because they don’t believe the virus is something they have to deal with.”

Rather than fade away in the face of new evidence, the claims have flourished, fed by mixed messages from officials, transmitted by social media, amplified by leaders like Trump and mutating when confronted with contradictory facts.

“You don’t need masks. There is a cure,” Dr. Stella Immanuel promised in a video that promoted hydroxychloroquine. “You don’t need people to be locked down.”

The truth: Federal regulators last month revoked their authorization of the drug as an emergency treatment amid growing evidence it doesn’t work and can have deadly side effects. Even if it were effective, it wouldn’t negate the need for masks and other measures to contain the outbreak.