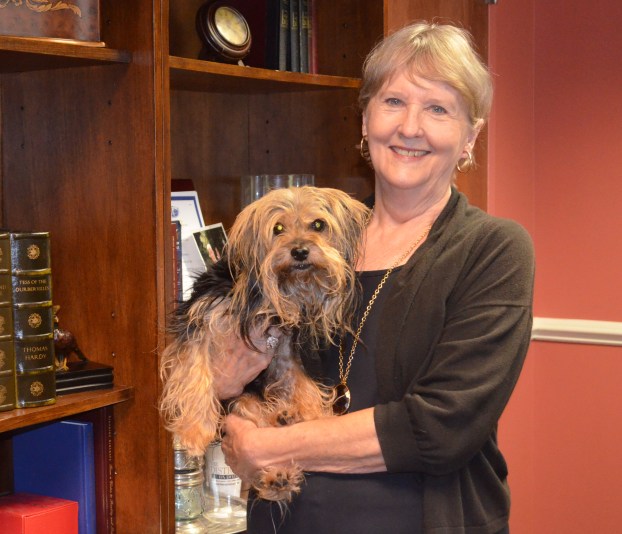 On Friday afternoon, July 31, 2020 after 18 years, Marsha Gaylard stepped down as president of the Pike County Economic Development Corporation.

That’s a long reign in the challenging world of economic development.

Gaylard admitted that it has not always been smooth sailing but, with an outstanding board, supportive civic leadership and willing business and industrial investors, it has been a good ride.

“But, it’s time,” Gaylard said with a smile. “I’ve been working since I was a young girl. I want to have more time with my family and to myself.”

“It will take time but I’m sure I will be able to relax and enjoy the slower pace of what retirement brings. I might even get used to it,” she said, laughing.

Gaylard’s career in the business world began working in the upstairs office at Rosenberg’s Dollar Store in downtown Troy. Her resume includes working in the insurance business and owning an interior decorating business in Montgomery before joining the Troy Chamber of Commerce and then Pike County Chamber of Commerce as president before homesteading at the Pike County Economic Development Corporation.

John Ramage, PCED Board president, said the corporation was founded in 2002 with the sole purpose of recruitment, retention and expansion of both industrial and retail business.

“Marsha has served as the only president of the PCEDC,” Ramage said. “Pike County is a much different place than it was in 2002 and, while Marsha and the EDC are not solely responsible for the growth, they both played a role in many of the new businesses that have located to Pike County during this time. The Board and its funding partners are grateful to Marsha and to the numerous successes she has had during her tenure.

Jimmy Lunsford, who has worked with Gaylard as Mayor of Troy and as a consultant for the PCEDC, said Gaylard has always said that she is just a part of a team and that is true.

“However, Marsha has had a team approach to every presentation the PCEDC makes,” Lunsford said. “Her ability to identify who should be a part of each team is very important and, then, to have the team present and make sure that all the bases are covered during recruitment is vital to the success of the presentation. Marsha does that better than anyone in the state.”

Lunsford said the projects that Gaylard has worked on have had major impact, not only on the dollars they have generated for the local economy directly,  but also through the indirect income they provided through the jobs provided.

“Added together, Marsha has been instrumental in bringing nearly 3,000 new jobs to Pike County,” he said. “There is no way to equate what she means to the Pike County economy and to the individuals who have benefited from good-paying jobs with good benefits.”

“Marsha helped with work on the various issues that had to be addressed when completing these type projects,” he said. “Her leadership and dedication to these projects made the tasks easier for us. These projects employ a large number of people in Brundidge and the surrounding area. We thank Marsha for a job well done and hope she has a great retirement.”

“And she has been a true blessing to Pike County.”

Lott and Gaylard worked closely together on the Walmart DC project in his hometown of Brundidge.

“Marsha was marvelous help in making that deal a reality,” he said. “All of Pike County has been blessed because of the work she has done.”

Gary Guthrie, PCEDC board member said, from the start, Gaylard has been the glue that kept the Economic Development Corporation together. Marsha surrounds herself with good people and she knows how to make good contacts. I admire her for what she has done behind the scenes to get us where we are today, to get the businesses that we have and to keep the torch going.”

However, Guthrie said the newly organized PCEDC struggled at the start.

“Max Davis and Jimmy Ramage had to help find the funds that we need and they found what we needed to sustain us. In Pike County, we have been fortunate to get the people to put things in place to be successful.

“Marsha knew the right people to help us put the Pike County Economic Development Corporation together to be successful. Her relationships, partnered with her ideas and leadership, made it possible to bring so many businesses and industries to Pike County.”

Guthrie added that Gaylard’s contact in the state “smooth-talked us into a lot of good jobs for the people of Pike County and around the area.”

Ted Clem, director, Office of Business Recruitment and Retention, Alabama Department of Commerce, said is a dedicated economic development professional who has left an imprint on the City of Troy and Pike County that will last for generations.

“Marsha has played key roles in recruiting companies like Lockheed Martin and Kimber to Pike County and has worked tirelessly with existing industries in the area to help them grow and prosper,” Clem said. I have enjoyed working with Marsha over the years and always took note of her love for the community.  Anytime we would bring a prospective business to Pike County we knew we could trust Marsha to present her community in the best way possible.  I will especially miss the lunch meetings with clients in her boardroom that often featured Marsha’s southern home cooking.  On top of being a first-rate economic developer, she is a great cook.”

Kenny Campbell, PCEDC board member and KW Plastics president, said he has had first-hand opportunities to work with Gaylard.

“I’ve been with Marsha on recruiting trips and I’m always amazed at how she works,” Campbell said. “I have been impressed with her attention to detail. She never overlooks anything. That’s what has made her so successful. She does things so well that she has spoiled all of us. Marsha is leaving some very big shoes to be filled and she certainly will be missed.”

Troy Mayor Jason Reeves said he has known Gaylard for more than 25 years.

“I knew Marsha first from a personal standpoint,” Reeves said. “Her husband, Bo, was my Sunday school teacher and baseball coach and their son, Derrick, and I have always been close. So, I learned to appreciate Marsha, first, from that standpoint – as a mother-type figure, taking care of the people around her.”

Reeves said, as an adult, he saw that same caring spirit in Gaylard when the two of them were in New York working on the Kimber project.

“While there, I got word that my good friend, Eric Mizell, had died,” Reeves said. “Being a thousand miles away with economic recruitment in front of me, I appreciated so much Marsha’s kindness and support that day.”

Reeves said Gaylard has the ability to deal with the demanding issues of economic development and the same ability as a hostess for the PCEDC.

“Marsha’s record speaks for itself,” he said. “The economic landscape of Pike County had change tremendously through her service. We appreciate what she has accomplished for Pike County and wish her all the best in retirement.”

Could we have a vaccine by 2021?: State adds 1,783 cases as Fauci testifies about vaccine