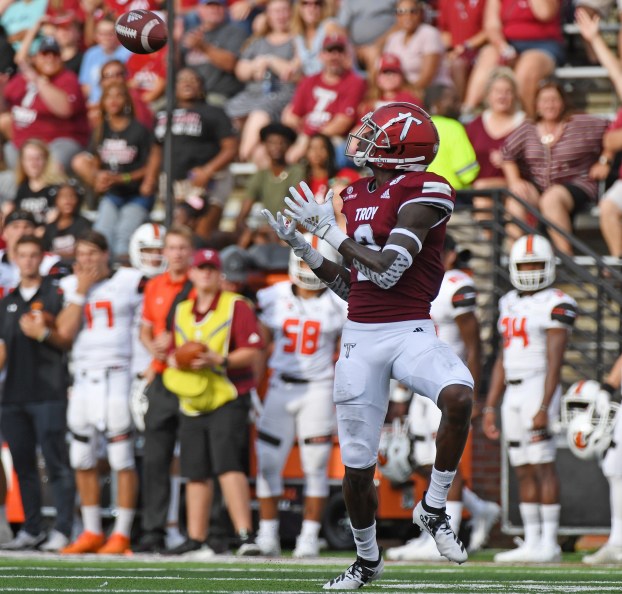 Troy wide receiver Reggie Todd (2) catches a pass during the first half an NCAA college football game against Campbell in Troy, Ala., Saturday, Aug. 31, 2019. (Photo/Thomas Graning)

In a statement released on Tuesday morning, the Sun Belt Conference announced each team will have the ability to play an eight-game conference schedule along with up to four non-conference opponents.

After many Power Five conferences elected to play conference only games this season, the Sun Belt Conference, along with many Group of Five Conferences, have been forced to alter their schedule.

“The 2020 Sun Belt Conference football season will be comprised of an 8-conference game schedule with an option for each member to add as many as four non-conference opponents, beginning with Week Zero,” the statement read.

The Trojans were originally scheduled to open their 2020 schedule against Arkansans-Pine Bluff, but the game was cancelled after the Southwestern Athletic Conference have postponed football season until the spring. Troy’s games against Tennessee and North Carolina State has also been canceled due the SEC and ACC electing to play conference only games. The ACC will play one non-conference game, however it must be against an in-state opponent.

The decision to start the season on Labor Day weekend came after “extensive discussions and careful deliberation.”

“After extensive discussions and careful deliberation among the Sun Belt Conference Presidents and Chancellors, Athletics Directors, SBC COVID-19 Advisory Panel, medical advisors, and other governance groups, the Sun Belt Conference announced today that its football season will begin over Labor Day weekend,” the SBC said in their statement. “Sun Belt member institutions have focused since June on a safe return to athletic activities. We believe this timetable will allow for the healthy integration of the entire campus community for each Sun Belt member.”

The Sun Belt Conference Championship, featuring the East and West Division champions will be played on December 5, however the date of that game may be adjusted.

The Sun Belt Conference will continue to monitor the current health situation.

“Sun Belt Presidents and Chancellors, Athletics Directors, the COVID-19 Advisory Panel, and medical advisors will continue to review data to ensure a safe return to activities and competition,” The statement read. “Our data review will cross seven states and 12 counties and include, among other things, infection rates, hospitalization rates, local health directives, advancements in COVID-19 testing and campus, department and team health trends.”

The Trojans will open Fall Camp on Friday morning.

Steve Fugate stood atop Maine’s Mount Katahdin with tears running down his face. But, it’s not unusual for those who... read more