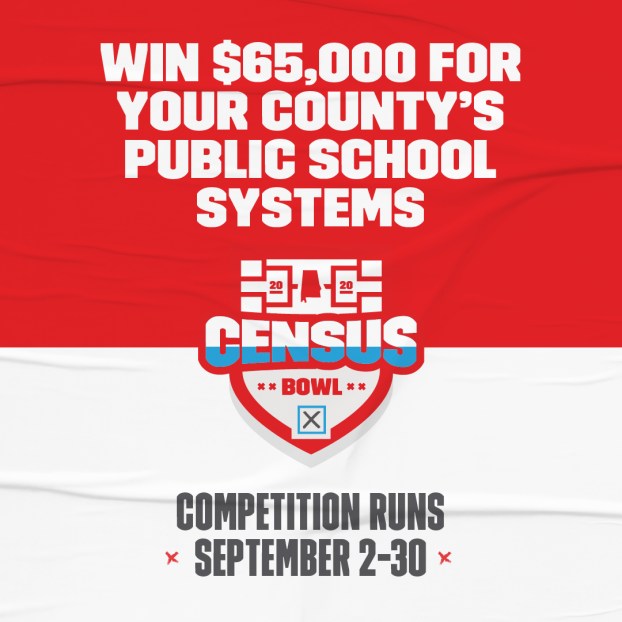 Pike County has moved ahead  to round-two in the Alabama Census Bowl 2020 and remains in the running for the $65,000 in grant funding for the public school systems.

The Alabama Census Bowl began with the 32 counties with the lowest self-response rate in the Alabama 2020 Census.

Pike County topped Bullock County in the number of self-responses for the week beginning September 2 and now moves to Round Two, the Sweet 16, of the Alabama Census Bowl.

Peters said Pike County was sitting at 51 percent self-response rate when the Census Bowl began and went up 3 percent in the first round.

“Self-responding only takes a few minutes and those minutes can be very beneficial to the county’s school systems,” Peters said.

“All Pike Countians who have not responded to the Alabama Census 2020 are encourage to do so. The quickest way is to go on line. It only takes three to six minutes. Mailing is the last resort.”

Peters said the Pike County Extension is available to assist those who have not self-responded to the 2020 Alabama Census.

“Those who have not responded are encouraged to come to our office at 306 South Three Notch Street in Troy, and we will assist with completing of the census form,” Peters said. “We have masks for those who don’t have them, hand sanitizer and we practice social distancing. We sanitize after every visit.”

“Those who cannot come to the office may call the Pike County Extension Office at 334-566-0984 and we will walk you through the process of completing the census form.”

Those who have lost their census forms may also contact the Extension Office for directions.

Peters said it is most important for every person in the county to be counted. Noting doing so, puts federal dollars and Congressional representation at riskl. That would mean a loss in federal funding for education and other programs.