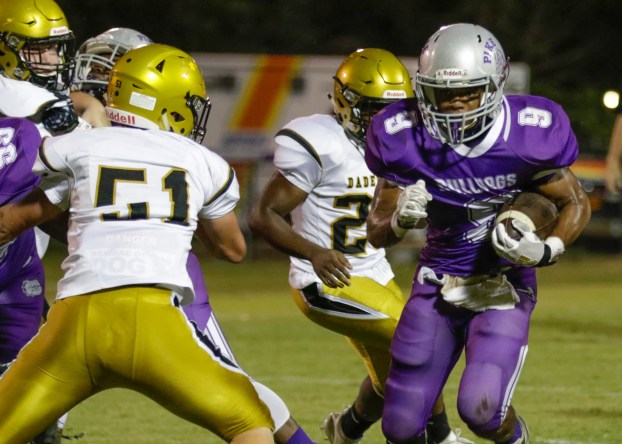 photo/Dan smith | The Messenger Pike County High running back Zakevin Pennington (9) had a huge night for the Bulldogs, rushing for five touchdowns and two 2-point conversions in the first half alone.

BRUNDIDGE – Pike County High junior running back Zakevin Pennington had a big night scoring six touchdowns and two 2-point conversions for a total of 40 points in a 60-14 PCHS win over Dadeville Friday night at Bulldog Stadium of Brundidge.

Pennington scored on runs of 16, 13, 22, 7, and 7 in the first half, while breaking a 43-yard TD in the third quarter for his sixth TD of the night. He ended the evening with 171 yards on 17 carries while playing only three quarters.

The win was the first contest of the season for PCHS, improving to 2-0 although one of those wins was a Covid-related forfeit victory earlier this season. Dadeville slips to 1-2 on the year. The contest was also a Class 3A, Region 4 battle among the two teams,

Dadeville got on the scoreboard first when junior running back JaVuntae Holley took it in from 5 yards out, capping a 73 yard drive that consumed over seven minutes off the clock. Gunner Fourtenbary added the extra point and it was 7-0 Tigers with 4:55 to go in the first quarter.

Pike County scored quickly, taking only two offensive plays, with Hornando Wheeler of PCHS taking the ball on the kickoff down to the DHS 24. Two plays later, Pennington scampered in from the 16 and it was 7-6 Dadeville.

Jaquavion Meadows of PCHS recovered a Dadeville fumble moments later, and two plays later Pennington took it in from the 13 for a 12-7 lead for the Bulldogs.

Pennington scored again on a 22 yard carry with 10:28 remaining in the half for an 18-7 advantage, but the Tigers cut that lead to 18-14 when quarterback Lane Smith found Issiah Tolbert open for a 4-yard touchdown pass play. Fourtenbary kicked again and it was 18-14 with 3:33 to go in the first half.

The Bulldogs went up 26-14 when Pennington raced in from the 7, and he also took it in for a 2-point conversion at 3:15 showing in the second quarter. Amaghie Lampley intercepted a pass for PCHS and returned it to the Dadeville 20, with Pennington taking it in two plays later from the 7. He added the 2-point conversion as well, and it was 34-14 with 2:17 showing.

Pike County quarterback Qua Coleman lofted a 32-yard touchdown pass to Ian Foster with 0:18 to play in the first half, and it was 40-14 at intermission.

Meadows intercepted a pass and returned it 2 yards for a PCHS touchdown with 7:25 to go in the third, and JhaNauris King ran in a 28-yard TD with 3:38 left in the game for the final score of 60-14.

Holley led Dadeville in rushing with 87 yards on 27 carries while Christian Nelson paced up 45 yards on 13 carries.

Dadeville is at home against Childersburg on Friday, Sept. 18, while Pike County is at Trinity of Montgomery.

Somewhere along the highway, in almost every state in America, a road sign is posted that reads “Jesus2020.” And for... read more