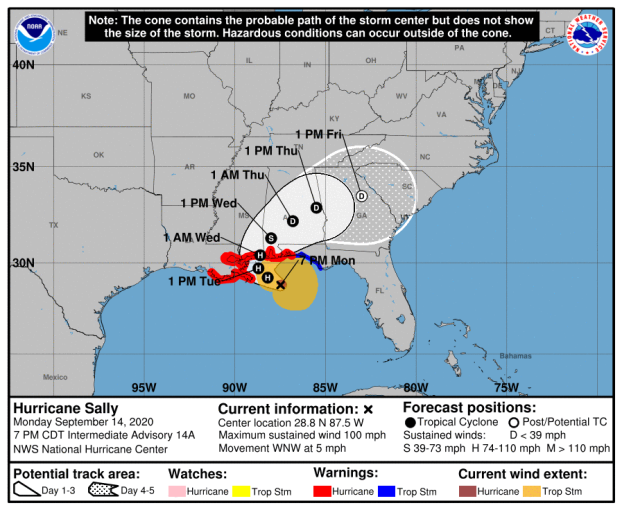 “The primary concerns for us at this time will include heavy rain, potential flooding, winds and some potential storms,” said Herb Reeves, Pike County EMA directory. “Based on the current forecast track and timeline, this will be a late Tuesday night/early Wednesday morning through Thursday event for Pike County.”

However, he said the situation is continuing to develop and change, including the forecast timeline.

The strengthening Category 2 storm, with wind speeds of more than 100 mph, was on track to reach land somewhere near the Mississippi-Alabama state line late Tuesday or early Wednesday. The National Weather Service in Mobile forecast “dangerous and potentially historic” floods from storm surge. Forecasters say waters could rise 9 feet (2.7 meters) above ground in large parts of the Mobile metro area. President Donald Trump already has approved a pre-landfall emergency declaration for Louisiana and Mississippi.

Gov. Kay Ivey, who earlier on Monday declared a state of emergency and closed Alabama beaches, requested a pre-landfall emergency declaration for the state Monday evening. “As projections for Hurricane Sally continue to develop… Alabama will likely receive significant impact from this system,” she said in a statement. “I just wrapped up a phone call with Acting DHS Secretary Wolf and FEMA Administrator Gaynor and asked them to expedite this request.”

Reeves said local officials expect to see some evacuees from coastal areas and could consider opening shelters on Tuesday. “We’ll watch to see how that develops, but we have been in contact about it,” he said.

Sally has lots of company during what has become one of the busiest hurricane seasons in history — so busy that forecasters have almost run through the alphabet of names with 2 1/2 months still to go.

For only the second time on record, forecasters said, five tropical cyclones swirled simultaneously in the Atlantic basin at one point Monday. The last time that happened was in 1971.

In addition to Sally were Hurricane Paulette, which passed over a well-fortified Bermuda on Monday and was expected to peel harmlessly out into the North Atlantic; and Tropical Storms Rene, Teddy and Vicky, all of them out at sea and unlikely to threaten land this week, if at all. Rene was downgraded to a trough of low pressure Monday evening.