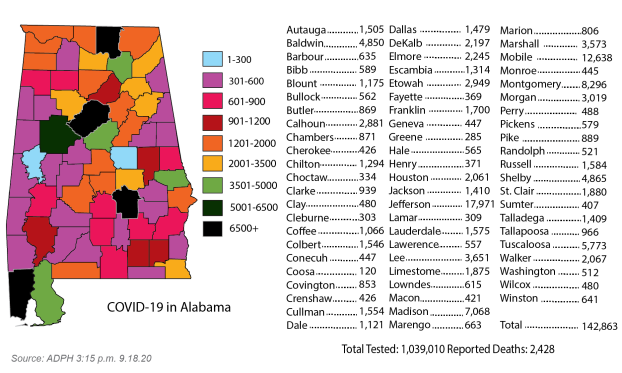 The rating is based on the 14-day positive rate in the county, which is deemed to be low, moderate, high or very high. Pike County had previously been rated “very high.”

The county added only one confirmed case and two probable cases with Friday’s update, bringing the totals since tracking began to 889 confirmed and 246 probable cases, with eight confirmed deaths.

Troy University added three new student cases, marking the fourth day in a row the university reported five or fewer cases. The university has reported 341 cases among students on the Troy campus since Aug. 3.

Statewide, the ADPH added 721 confirmed cases and 385 probable, bringing totals to 128,818 and 14.045 respectively. The probable cases are those identified by antigen, or rapid-response tests. The ADPH says more than 61,230 have recovered since tracking began and 2,428 have died from the virus, with only 740 currently hospitalized. More than 1.039 million people have been tested in Alabama.

For the 11th year, the Pike County Salvation Army Empty Bowls 2020 Luncheon on Friday was a great success. The... read more