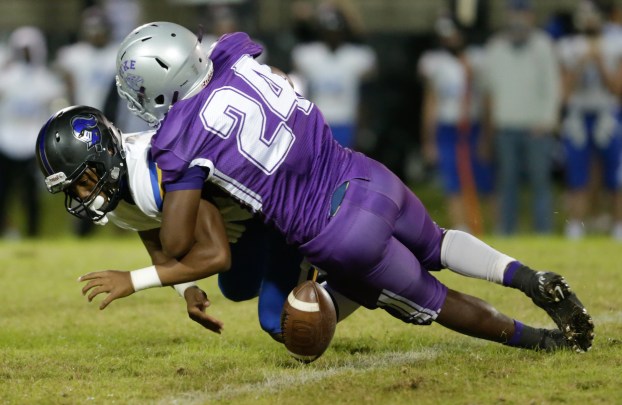 A valiant fourth-quarter effort came up short as the Pike County High Bulldogs fell 13-12 to No. 9 Montgomery Catholic Friday night at Bulldog Stadium in Brundidge in a Class 3A, Region 4 battle.

PCHS led 12-6 entering the fourth quarter before the Catholic Knights pushed ahead for a touchdown with less than eight minutes remaining. The Bulldogs then drove as close as the Catholic 21 yard line with less than two minutes to go in the game but could get no closer, turning the ball over on downs when a pass fell incomplete with 34 seconds remaining on the clock.

The Knights, improving to 5-2 overall and 4-0 in the region, got on the scoreboard first when quarterback Caleb McCreary found wide receiver Johnathan Rhoden open for a 49-yard TD pass play, the extra point was blocked, and it was 6-0 Montgomery Catholic with 6:37 remaining in the first quarter.

Each team traded blows for the remainder of the first half before Bulldog junior running back Zakevin Pennington ripped off a 93-yard touchdown run with 8:39 remaining in the first half. The extra point was wide, and it was 6-6.

The Knights mounted a 69-yard scoring drive in the final 10 minutes of the game, taking five plays to go up for good. Facing first and 19 following a penalty play, McCreary lofted a 35-yard TD strike to Dezhion Carter for the score. The extra point by Callan Gadilhe was good, and it was 13-12 with 7:24 to go in the game.

PCHS had a great kickoff return by Caleb Foster to the 50, where the Bulldogs took over with 7:17 left.

The Bulldogs marched to the Catholic 21 where they faced second and two yards to go with less than two minutes in the contest, but moved backward on a penalty play, following by a one-yard rushing play, another run for no gain, and an incomplete pass on fourth down to end the drive at the Catholic 25, and the 13-12 win by the Knights.

Pennington led PCHS in rushing with 204 yards on 32 carries and one TD.

The Bulldogs, now 2-2, will travel to Goshen next Friday evening for another Class 3A, Region 4 matchup.