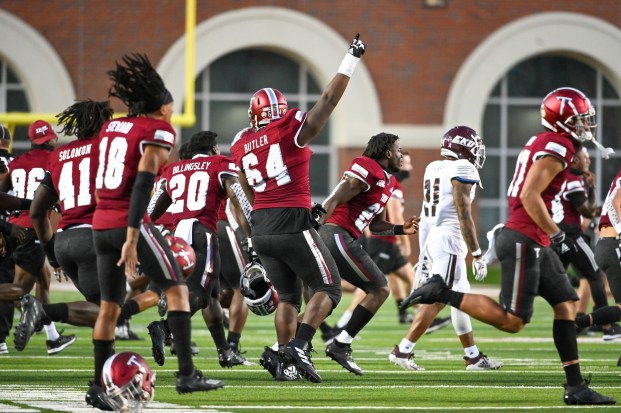 Legassey kicks Troy to a 31-29 win over Eastern Kentucky

Evan Legassey nailed a 47-yard field goal as time expired to give the Trojans a 31-29 win over Eastern Kentucky on Saturday afternoon inside Veterans Memorial Stadium.

Trailing 29-28 after a last-minute touchdown by EKU, The Trojans took over on their own 40 with 21 seconds remaining. Watson connected with senior receiver Khalil McClain, who slid down on the 30 yard line to set up a 47-yard field goal with two seconds remaining.

Legassey nailed the kick to equal his career long.

“My contact wasn’t the best all game, but everything was going straight,” Legassey said. “In my position, it’s good when everything is going straight. Without overthinking anything I did what I was doing all game and that’s hit the ball straight. I knew I had the leg, so I wasn’t stressing about kicking the ball harder than normal.”

It was Troy’s first game-winning kick since Will Scott gave the Trojans a victory over UAB in 2013. The win for the Trojans gives them a 3-1 record on the season.

“Really proud with how our guys continue to fight,” head coach Chip Lindsey said. “We had adversity all night and we overcame. We kept scratching and found a way to win. Evan made a huge kick, and obviously after last week when we didn’t execute very well in field goals and PAT, I feel like it was a big step in the right direction.”

Quarterback Gunnar Watson finished the contest completing 26 of his 38 passes for 333 yards and had three touchdowns.

The Trojans took the opening possession of the game 91 yards and scored the first touchdown of the contest. Kaylon Geiger caught the first pass of the game and went 46 yards. After a 25-yard catch by B.J. Smith, AJ Lewis scored his fourth career touchdown when he hauled in a 16-yard catch.

After a beautiful punt by Troy punter Kyle Coale pinned the Colonels inside their five-yard line, quarterback Parker McKinney connected with Keyion Dixon for a 96-yard touchdown that eventually tied the game at 7.

Watson threw two first half touchdowns. The second one came when he connected with McClain in the back of the endzone for a 6-yard touchdown to put Troy up 14-7 with 3:16 remaining in the half.

The Colonels scored 10 unanswered points to take a brief lead in the second quarter. After making a 19-yard field goal, the Colonels took the lead on a 12-yard run by Alonzo Booth, bringing the score to 17-14.

Vidal had runs of 27 and 22 yards in Troy’s final drive of the half. He capped the drive with a one-yard touchdown run, giving Troy a 21-17 lead going into halftime.

The Trojans took the possession 80 yards on eight plays and scored on a 22-yard touchdown completion by Reggie Todd, giving Troy a 28-17 lead with 9:35 remaining in the third quarter.

In the opening minute of the fourth quarter, the Colonels got to within one possession when Alexander Woznick converted his second kick of the game, this time from 22 yards out to bring the score to 28-20 with 14:41 remaining in the game.

After a Troy fumble gave the Colonels possession at midfield, EKU looked to have scored a touchdown on a deep pass that was fumbled and recovered for a touchdown. After review, the call was overturned and called an incomplete pass, forcing EKU to punt the ball back to Troy with 11:28 remaining.

The Trojans had their second turnover of the quarter when Watson threw an interception on a screen pass to Colonel defensive lineman Elijah Taylor. After keeping the Colonels out of the endzone, Troy held EKU to a 25-yard field goal, bringing the score to 28-23 with 5:50 remaining. With time dwindling down, the Colonels took over on their own 20 trailing by five points with 2:49 remaining in the fourth quarter. The Colonels marched 80 yards and scored on a four-yard touchdown pass to Keyion Dixon, putting the Colonels up 29-28 after a missed two-point conversion with :21 seconds remaining.

Geiger finished with 100 yards for the second consecutive game when he caught seven passes for exactly 100 yards. Running back BJ Smith caught six passes for 96 yards.

The Trojans will be back in action next Saturday when they host Georgia State at 3:00 p.m.