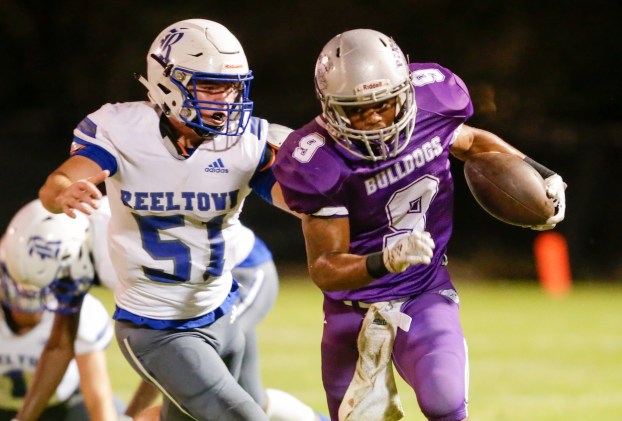 BRUNDIDGE, AL – Two evenly matched teams fought toe-to-toe Friday night with an AHSAA Class 3A playoff berth hanging in the balance, as a blocked extra point in the fourth quarter was the difference in a Pike County High 21-20 win over Reeltown.

Reeltown scored a touchdown with 6:56 left in the game to make the score 21-20, but Kahriyus Pennington of PCHS blocked the extra point attempt, allowing the Bulldogs to cling to a one-point lead for the remainder of the contest.

PCHS improves to 5-3 overall and 5-2 in Class 3A, Region 4 play, and has secured a spot in the Class 3A playoffs. Reeltown stands at 4-5 overall and 3-4 in the region. Montgomery Catholic, Trinity Presbyterian, Pike County and Dadeville appear to be the top four teams in the region.

“One thing about it, we knew it would be a tough game,” said PCHS Head Coach Fred Holland. “I told our kids when we watched film that it was going to be a tough game, and it lived up to everything I thought it would be. Reeltown has a good football team, and they played hard. We made a couple of mistakes but battled back and was able to run the clock out in the end.”

Reeltown Head Coach Matt Johnson had great things to say about his team, their effort, and the PCHS team as well following the game.

Zakevin Pennington got PCHS on the board when he broke a 62-yard TD run, Ian Foster connected with Caleb Foster for a 2-point conversion on a fake PAT and it was 8-0 PCHS with 11:10 to go in the first quarter.

Reeltown later scored when quarterback Gabe Bryant went in from 4 yards out, the try for two was not successful, and it was 8-6 PCHS with 8:04 left in the half.

Pennington scored again on a 59-yard run to put PCHS up 15-6 with 2:51 in the second quarter, and Ian Foster intercepted a Reeltown pass and returned it 99 yards for a touchdown and a 21-6 lead before the half.

Reeltown roared back in the second half, with Dakarian Hughley taking it in on a 26-yard TD, and Hughley added a two-point conversation to cut the lead to 21-14.

The Rebels cut the margin to 21-20 when Johnny Brown scored on a 1-yard carry, but the extra point was blocked with 6:56 to play, which held up to be the final.

Pennington led all rushers with 190 yards and two touchdowns on 17 carries.